Do you see where I’m going with this? The road of perception is different for everyone. 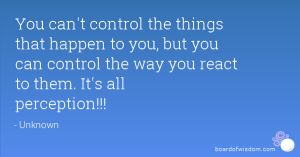 As a writer, in developing characters, you want well rounded character development. Point of view (POV), the voice you give your characters, is one part of how you flush out your characters flaws, quirks, and overall oompf that makes us fall in love with them. That is just part of how the character perceives himself. Is your main character experiencing everything first hand in telling the story, using I, me or my? Will your characters merely observe their own actions as the story unfolds using he, she, his, hers? What will their perception be as their story is written? Your readers learn as your characters learn so perception becomes important when choosing a voice.

You’d think outside traits are high on the list because who is going to star in the movie version of your book, right? Wrong, or partially wrong. This is fiction, so of course make your fictional characters colorful, then cover artists will craft something stunning. So don’t lose sleep picking eye color, hair color, and other outside package features. Yes, you want to help fill your readers with visuals that correspond with your character traits and coordinate with the world you have created.  Readers will fill in voids from their own experiences and the visual cues you’ve already given them.

Next on your list of character development, you need to fill your characters with morals, values, basically everything that makes them who they are. Whether the character you are developing is the hero or the antagonist they have the same common thread. They both have their reasons for how they act, how they live, what they believe and trust me on this, whether they are hero or villain, they both perceive themselves as doing the right thing for their cause.

WHAT? A villain is right? What is wrong with the world?

A look back in history proves that a villain believes they are right until their dying breath. They are even more “right” in their convictions than the hero is in their vindication of defeating the antagonist. How else would they gain followers unless they believe in their cause undoubtedly.  The hero more times than not fights the fight alone. The question you want to ask yourself is, what lead them down this dark path to begin with? Why is this cause so important to them? You may or may not use the answer to these questions in your story, but it will help create and shape your characters. Making them richer and more evolved for your readers. Don’t forget when crafting your villain everything is based on perspective.

Let’s stop and think about this for just a second.

To a mouse, a cat is an evil terror. To a cat, a mouse is a delightful treat. Who is right in this scenario? Both and neither. It’s all based on perspective.

As a storyteller you get to decide. Which side do you want to take, who is the villain and what voice do you want to use? Whatever side you pick stick to your guns until the bitter end. Don’t waffle. Don’t make the cat a vegetarian right at the end. The cat wants that mouse and will do everything in its power to entrap, ensnare, and eat that mouse.

Now if you can come up with a great twist that isn’t cliché you have a major blockbuster on your hands. You will get the opportunity to use your sparkly shoes. The struggling writer finally victorious.

Until next time, keep reading, keep writing, and good fortune.