About WHISKEY SECRETS (Whiskey and Lies #1)

Sparks fly between a former cop-turned-bartender and his new innkeeper in the first installment of a Montgomery Ink spin-off series from NYT Bestselling Author Carrie Ann Ryan.

Dare Collins is a man who knows his whiskey and women—or at least that’s what he tells himself. When his family decides to hire on a new innkeeper for the inn above his bar and restaurant, he’s more than reluctant. Especially when he meets the new hire. But he’ll soon find that he has no choice but to work with this city girl and accept her new ideas and the burning attraction between them.

Kenzie Owens left her old life and an abusive relationship behind her—or so she thought. She figures she’ll be safe in Whiskey, Pennsylvania but after one look at her new boss, Dare Collins, she might still be in danger, or at least her heart. And when her past catches up with her despite her attempts to avoid it, it’s more than her heart on the line. This time, it might mean her life.

Get your hands on WHISKEY SECRETS now!

She blinked up at him and licked her lips, bringing his attention to the curve of her mouth. He wasn’t even sure she was aware she’d done it.

He inhaled her scent, trying to calm himself, but his heart still raced. “Can I kiss you?”

He didn’t know why he’d asked, other than the fact that he truly wanted to taste her. With anyone else, he would have just kissed them, knowing they wanted it from their body language and the look in their eyes. He wouldn’t have had to ask. Kenzie? He couldn’t read her, even though he thought he might be able to one day. So he’d asked. He’d bared himself to her and asked.

She didn’t startle, didn’t blink. “You want to kiss me?”

It wasn’t a no, but he still didn’t move. “No, we probably shouldn’t. But I still want to. Will you let me?”

She swallowed hard, and he could feel her jaw work as she did so. “I… we can’t… okay.” He was the one who blinked this time. “Okay?”

He chuckled. “We sound like we’re in middle school now, trying to figure out how to kiss.”

She smiled again, and before she could say anything, he lowered his head and took her lips with his. She gasped into his mouth, but he didn’t deepen the kiss, not yet. He knew he needed to take his time with her, to take his time for both of them.

She tasted like coffee and sweetness, an intoxicating combination that set him on edge. When she hesitantly placed her hands on his sides, he groaned, but still didn’t kiss her harder. Instead, he tasted her mouth, explored her feel, and made sure this kiss would be ingrained on his mind— and hopefully hers— forever.

And when he pulled back, they were both breathless.

He swallowed hard, resting his forehead on hers. “I can never think when you’re around.”

When she let out a strained laugh, he pulled back to look at her.

“You have to stop saying things like that. We don’t like each other, remember? We’re keeping our distance.”

He tucked a piece of her hair behind her ear. “I don’t think we were ever enemies, Kenzie. That was just a lie we told ourselves so we wouldn’t do what we just did.”

“I should go.” She pulled away from him, and he let his hands drop to his sides. “I…” She didn’t say anything else; instead, she walked out of his office, leaving him alone with his thoughts and his hope that he hadn’t just messed things up royally.

But now that he had? Well, hell, he wasn’t sure he’d had enough of her. 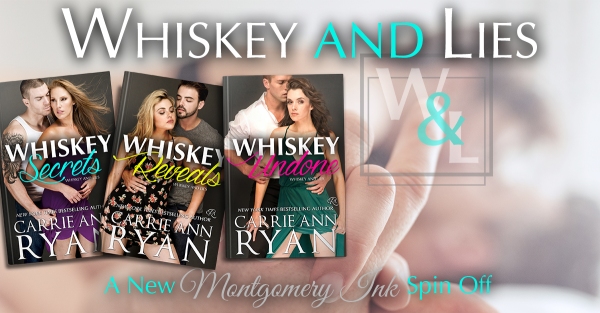 Carrie Ann Ryan is the New York Times and USA Today bestselling author of contemporary and paranormal romance. Her works include the Montgomery Ink, Redwood Pack, Talon Pack, and Gallagher Brothers series, which have sold over 2.0 million books worldwide. She started writing while in graduate school for her advanced degree in chemistry and hasn’t stopped since. Carrie Ann has written over fifty novels and novellas with more in the works. When she’s not writing about bearded tattooed men or alpha wolves that need to find their mates, she’s reading as much as she can and exploring the world of baking and gourmet cooking.