Whoa! What did I just read?!

Some authors begin a sensitive subject book with a warning or perhaps the reason why they couldn’t avoid the writer’s voice and decided to forge ahead and tackle the hard subject at hand. Tijan dove right in to Ryan’s Bed and wrote a story told entirely through Mackenzie Malcolm’s POV, an 18 year old girls POV to boot.

What teenage girl doesn’t have a skewed perspective of the world going on around her at some point? Add in a splash of teenage emotions, a dash of changing hormones, toss in a move from your hometown during your senior year in high school, and throw it in a blender. BLAM! That is enough to send any teenage girl into a drama-llama spiral of emotions.

I am pretty sure Tijan is a teenage girl because she captured the roller coaster mindset of Mackenzie beautifully. Beginning from page one you will go on a journey with Mac and watch her transformation. You will feel her struggles and understand her choices whether they are good or bad.

We were all 18 once and remember our own mistakes, hurts, losses, but Ryan’s Bed is more than that. Tijan was able to bring focus on what Mackenzie’s parents were feeling, along with her little brother, without using their POV. She was able to show us how everyone grieves differently.

I found myself going back and rereading parts of the book, while I was still reading it. Mackenzie changes so much during the book that I sometimes wondered if I’d missed something. When I went back, it wasn’t that I’d missed something, it was more of a feeling that Mackenzie kept evolving. It wasn’t until the end of the book that Tijan actually says, “I hope you reread the book, but see it in an almost totally different way.” I won’t say more because I believe every reader needs to experience the journey for themselves, but I want to go back myself and reread the entire thing again.

Mackenzie Malcolm is a new student, a nobody, a broken girl who just lost her sister. The poplar boy at the school, the new one she will be attending in the fall, Ryan Jensen, is drawn to her. It doesn’t gain her friends, but Mac isn’t interested in gaining popularity. She just craves being next to Ryan. It’s hard to explain their instant connection, since Mac and Ryan find it hard to explain themselves, but Mac needs Ryan like she needs her next breath.

With everything Mackenzie loses, she may drown if she lost Ryan too.

Life just couldn’t be that cruel, could it?

Everyone else she’s loved is gone, since the night she slept in Ryan’s bed.

Pick up this book, read it today. To quote Tijan, “I have never written a book that changed me.” I agree, you will be forever changed reading this book.

One-minute Casey Shea was minding her own business, doing her job, teaching entomology to college students, and the next she was in the middle of the Costa Rican jungle fighting for her life.

Troy “Beatle” Lennon had watched his friends fall head over heels in love, but never thought it would happen to him. Until he sees a picture of one of his teammates’ sisters. That was it. The absolute joy in her eyes calls to him in a way he can’t understand.

But that joy is currently being threatened by an unknown person who’d had Casey kidnapped and hidden deep in the jungle. It’s up to Beatle to find her and keep her safe until the threat against her can be neutralized. Surviving the dangers of the jungle turns out to be the easy part…staying ahead of the killer is much more complicated…and deadly.

**Rescuing Casey is the 7th book in the Delta Force Heroes Series. Each book is a stand-alone, with no cliffhanger endings.

Excerpt:
Casey swayed, but refused to sit. Five minutes. That’s all she had to do. Hell, she’d walked for hours earlier. She could stand, no problem.

But it was a problem. Even though she couldn’t feel her feet, she could feel her legs. And they hurt. Hell, everything hurt. But it was more than that. She was weak. The adrenaline of her rescue had long since worn off and the lack of food and water had caught up to her.

The granola bars she’d eaten earlier, along with the constant intake of water, had gone a long way toward making her feel not on the verge of death. But the week and a half she’d spent underground without real sleep, along with all the worry and stress she’d experienced, had caught up to her.

Just when she thought she was going to fall on her face, Beatle was there.

“Fuck, you’re amazing,” he said, then swung her up into his arms once more.

Casey regretted saying earlier that she wanted to walk out of the jungle. Suddenly she wanted nothing more than to have Beatle carry her out, just like this. But no, that wasn’t fair to him, and she didn’t want to be the weak damsel in distress. She’d stayed alive when she knew others would’ve died, so she could walk her own damn self out of the jungle.

But…Beatle’s arms around her felt so good. Safe.

New York Times, USA Today, and Wall Street Journal Bestselling Author, Susan Stoker has a heart as big as the state of Texas where she lives, but this all-American girl has also spent the last fourteen years living in Missouri, California, Colorado, and Indiana. She’s married to a retired Army man who now gets to follow her around the country.

She debuted her first series in 2014 and quickly followed that up with the SEAL of Protection Series, which solidified her love of writing and creating stories readers can get lost in.

Amazon → http://amzn.to/2Df0Q4i
Nook → http://bit.ly/2rhmkvT
Google → https://goo.gl/Diqycw
Kobo → https://goo.gl/n76BTm
iBooks → coming soon!
Buy it DIRECT from Vanessa → https://goo.gl/wBEhtR
If you’ve never saddled up with a few Vanessa Vale cowboys, now is your chance! Welcome to Steele Ranch, where the men are hot, dominant and know what they want.

For Cord Connolly and Riley Jamison, that’s sexy and sinfully sweet Kady Parks.
The Philadelphia schoolteacher discovers she’s the heir—along with half-sisters she didn’t know existed—to the Steele fortune, including a real-life cattle ranch. Instead of spending her summer break at home, she’s in Barlow, Montana. And the West is as wild as she imagined, for two hot cowboys have decided to lay claim, taking her for one wild ride. And Kady? She’s ready to dig in her spurs and hang on tight.

About the Author:
Vanessa Vale is the USA Today Bestselling author of over 30 books, sexy romance novels, including her popular Bridgewater historical romance series and hot contemporary romances featuring unapologetic bad boys who don’t just fall in love, they fall hard. When she’s not writing, Vanessa savors the insanity of raising two boys, is figuring out how many meals she can make with a pressure cooker, and teaches a pretty mean karate class. While she’s not as skilled at social media as her kids, she loves to interact with readers.
Connect with Vanessa!
Website: www.vanessavaleauthor.com
Newsletter: http://freeromanceread.com
Facebook: https://www.facebook.com/vanessavaleauthor
Twitter: www.twitter.com/iamvanessavale
Amazon: http://amzn.to/2h5ZDG0

Are you ready to be LOVE STRUCK?
Love Struck by Nana Malone is releasing on FEBRUARY 7th!
Check out the HOT cover & preorder now! 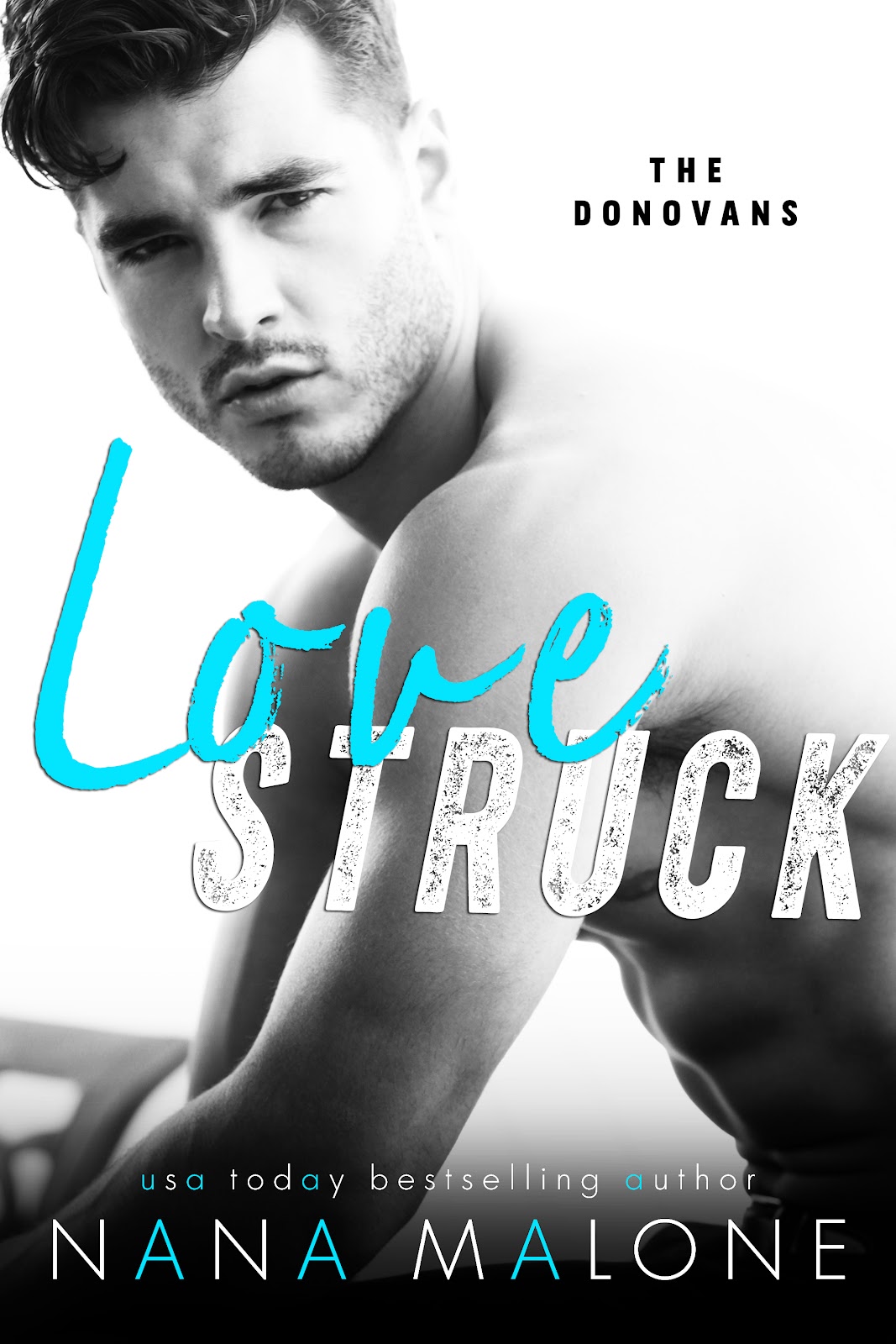 Blurb:
Just call him a rule breaker…
Zephyr Donovan knew the sacred rule. Never date a student. With the demons in his past, all he wanted was a fresh start. He wasn’t looking for trouble. But trouble tasted so damn good.
There are reasons for the rules…

Malia Adams had a complicated life. Well, actually it was pretty simple. Survive. Stay off the streets by any means necessary. And that was a nightly struggle. She didn’t have time to get involved with anyone.
Especially not the one person she can’t have.

About the Author:
USA Today Bestselling Author, NANA MALONE’s love of all things romance and adventure started with a tattered romantic suspense she borrowed from her cousin on a sultry summer afternoon in Ghana at a precocious thirteen. She’s been in love with kick butt heroines ever since.

Waiting for her chance at a job as a ninja assassin, Nana, meantime works out her drama, passion and sass with fictional characters every bit as sassy and kick butt as she thinks she is.

The books in her series have been on multiple Amazon Kindle and Barnes & Noble best seller lists as well as the iTunes Breakout Books list and most notably the USA Today Bestseller list.

Until that ninja job comes through, you’ll find Nana working hard on additional books for her series as well as other fun, sassy romances for characters that won’t leave her alone.