When they were growing up, Dana, Harper, and Tawny thought of themselves as “sometimes sisters.” They connected only during the summer month they’d all spend at their grandmother’s rustic lakeside resort in north Texas. But secrets started building, and ten years have passed since they’ve all been together—in fact, they’ve rarely spoken, and it broke their grandmother’s heart.

Now she’s gone, leaving Annie’s Place to her granddaughters—twelve cabins, a small house, a café, a convenience store, and a lot of family memories. It’s where Dana, Harper, and Tawny once shared so many good times. They’ve returned, sharing only hidden regrets, a guarded mistrust, and haunting guilt. But now, in this healing summer place, the secrets that once drove them apart could bring them back together—especially when they discover that their grandmother may have been hiding something, too…

To overcome the past and find future happiness, these “sometimes sisters” have one more chance to realize they are always family.

Read Kay’s Review: I Wish I Had A Sister Now More Than Ever 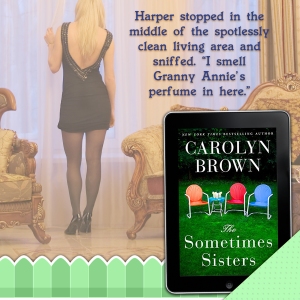 Harper stopped in the middle of the spotlessly clean-living area and sniffed. “I smell Granny Annie’s perfume in here.”

“All I smell is smoke,” Tawny whispered as she stuck her ear close to the curtain in the doorway.

“What are you doing?” Harper took a couple of long strides and did the same thing. “Can you hear them?”

“Shh.” Tawny put a finger over her lips and leaned against the curtain a little more.

“What’s goin’ on in here?” Zed whispered right behind them.

He startled Tawny so badly that if Harper hadn’t grabbed her by the arm she would have burst right through the curtain.

“On who?” Zed filled up the rest of the space when he leaned in to listen, too. “Is it Dana and Brook?”

New York Times and USA Today bestselling author Carolyn Brown was born in Texas and raised in southern Oklahoma. These days she and her husband make their home in Davis, Oklahoma, a small town of less than three thousand people where everyone knows everyone, knows what they are doing and with whom, and read the weekly newspaper to see who got caught.

A plaque hangs on her office wall that says I know the voices are not real but they have such great ideas. That is her motto and muse as she goes through the days with quirky characters in her head, telling their stories, one by one, and loving her job.

She has been married almost half a century to a retired English teacher that she calls Mr. B and he does not read her books before they are published because she cannot afford a divorce. They have three grown children and enough grandchildren to keep them busy and young.

When Carolyn is not writing she likes to sit in the back yard and watch the two tom cats protect the yard from all kinds of wicked varmints like crickets, other cats, spiders and blue jays.