What if someone handed you over a million dollars in uncut diamonds, and a note? For services rendered…

A random act of kindness years earlier gives rise to an astonishing chain of events. Johan Klaas holds the key to the mystery and he will help her – for a price. Can she trust him? Should she? And what has Christa ever done to deserve such a reward?

Swept from her modest flower shop in England, caught up in the opulent global diamond trade in Antwerp and introduced by her millionaire lover to a sensual world of pain and pleasure, Christa is determined to solve the riddle.

Second chances? You’re going to believe in them…
Double Play by Eva Charles is now LIVE on your favorite platform!!!

Check out the stunning cover!! 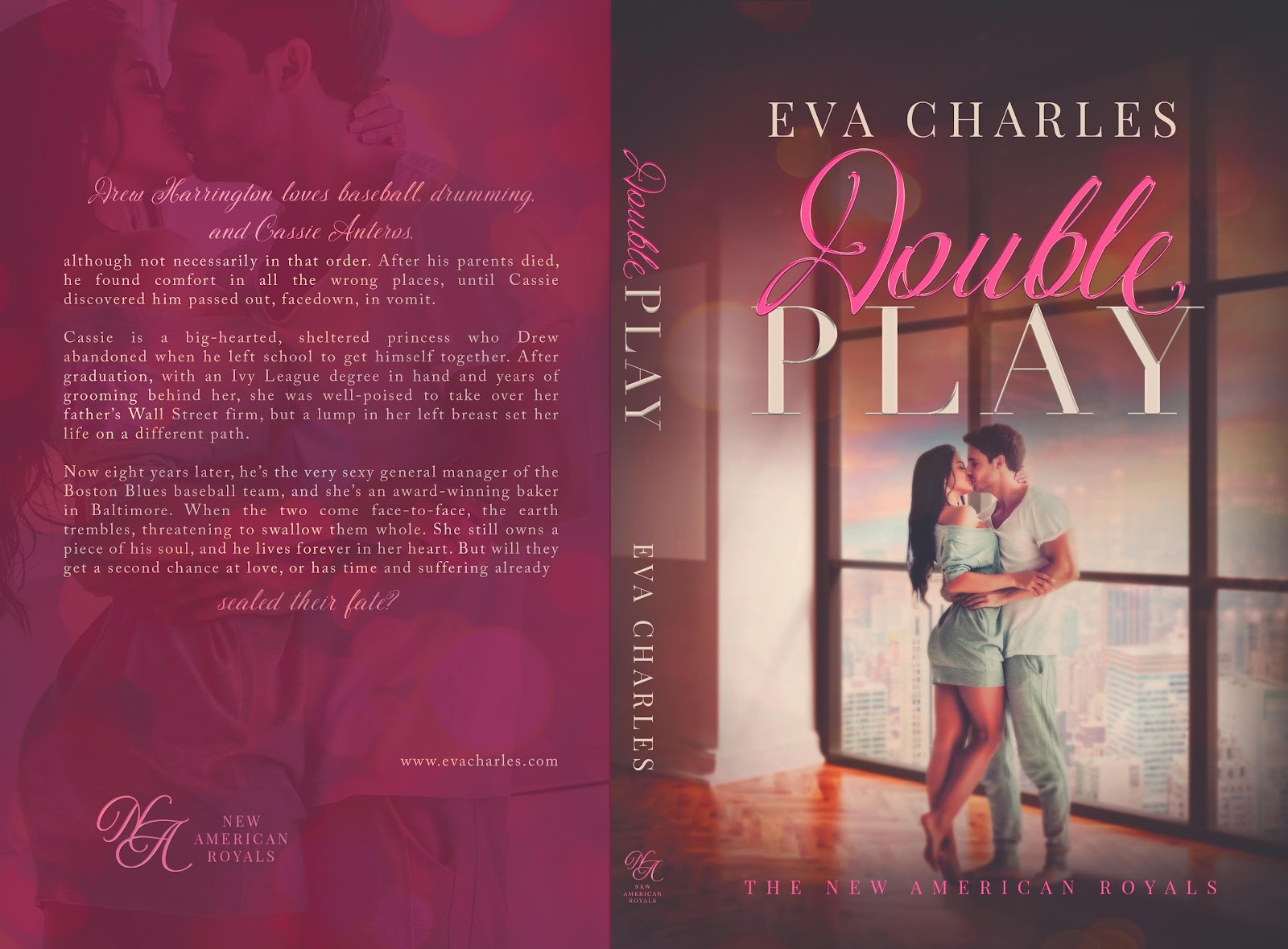 Drew Harrington loves baseball, drumming, and Cassie Anteros, although not necessarily in that order. After his parents die, he finds comfort in all the wrong places, until Cassie discovers him passed out, facedown, in his dorm room.

Cassie is a big-hearted, sheltered princess who Drew abandons when he leaves school to get himself together. After graduation, with an Ivy League degree in hand and years of grooming behind her, she is well-poised to take over her father’s Wall Street firm, but a lump in her left breast sets her life on a different path.

Now eight years later, he’s the very sexy general manager of the Boston Blues baseball team, and she’s an award-winning baker in Baltimore. When the two come face-to-face, the earth trembles, threatening to swallow them whole. She still owns a piece of his soul, and he lives forever in her heart. But will they get a second chance at love, or has time and suffering already sealed their fate?

This is book 3 of The New American Royals. It was previously published as Petite Madeleine.

After being a confirmed city-girl for more than thirty-five years, Eva moved to beautiful Western Massachusetts in 2014. There, she found herself living in the woods with no job, no friends (unless you count the turkey, deer, and coyote roaming the backyard), and no children underfoot, wondering what on earth she’d been thinking. But as it turned out, it was the perfect setting to take all those yarns spinning in her head and weave them into romantic tales.

A FORBIDDEN LOVE SET IN THE EXPLOSIVE WORLD OF THE NBA…
Think you know what it’s like being a baller’s girl?
You don’t.
My fairy tale is upside down.
A happily never after.
I kissed the prince and he turned into a fraud.
I was a fool, and his love – fool’s gold.
Now there’s a new player in the game, August West.
One of the NBA’s brightest stars.
Fine. Forbidden.
He wants me. I want him.
But my past, my fraudulent prince, just won’t let me go.

He thaws me with his kiss, my prince, and I melt into him. Chest to chest, August’s number crushed between us, I take him in my hands, aligning our bodies, and two become one in a carnal slide of flesh. I anchor myself by my elbows hooked around his neck, and we kiss until I’m dizzy and our breaths tangle in a cloud of bliss. Under the jersey, his palm spans my back, digging into the naked flesh as our hips lock and roll and grind. My body clenches around him, and we pray, we curse, we moan, we mate like our bodies were made for this moment.
Ours is a love that reimagines; that peels back the sky at high noon searching for the stars, collecting them like shells in a bucket. We bathe in stardust, drink from the Milky Way and dance on the moon. We pierce the firmament, peer into infinity and tread on time and space. There is no before. There is no after. Now gives birth to forever. This moment may die, but this love never will. Time is not a line. It’s a circle, and we, August and Iris, we stand at the center.

Kennedy Ryan is a Southern girl gone Southern California. A Top 100 Amazon Bestseller, Kennedy writes romance about remarkable women who thrive even in tough times, the love they find, and the men who cherish them.
She is a wife to her lifetime lover and mother to an extraordinary son. She has always leveraged her journalism background to write for charity and non-profit organizations, but enjoys writing to raise Autism awareness most. A contributor for Modern Mom Magazine, Kennedy’s writings have appeared in Chicken Soup for the Soul, USA Today and many others. The founder and executive director of a foundation serving Georgia families living with Autism, she has appeared on Headline News, Montel Williams, NPR and other media outlets as a voice for families living with autism.

Learning to be Little from Kathryn R. Blake.
AVAILABLE NOW

When childhood is denied you, sometimes you need to learn how to be little.

After a bleak childhood in foster care, Kelly’s growing mistrust has her running away again and again. Homeless and penniless, with no relatives to harbor her and a penchant for escaping her caretakers, Kelly is finally handed over to one of the few parish orphanages remaining in existence until she turns eighteen, when she is released.

Possessing only a little money, few skills, and even fewer resources, Kelly’s attempts at job hunting end up with her prowling the streets in desperation – until a wealthy stranger makes her a proposition she is too cold and hungry to refuse. Though it isn’t until he takes her home that she realizes just what she’s gotten herself into.

Publisher’s Note: This book contains elements of power exchange, and dynamics of age-play as well as discipline. If any of these offend you, please do not purchase.

Kelly’s subconscious, however, wasn’t quite as reassured by the events of the day as her waking thoughts were. With her dreams overtaken by locked closet doors and pools of dark-red blood, she woke up screaming as she struggled to free herself from the iron bands encasing her.

“Shh, Kelly, my darling one. You just had a bad dream. Hush. You’re safe with Daddy. Don’t cry, sweet one. Don’t cry. Calm down and listen to Daddy’s voice as he tells you how adored and desired you are.”

Kelly instantly calmed, which surprised her. Normally, when she suffered these nightmares, she was left shaking for hours, but this man’s tender restraint and quiet manner soothed her. Content to be held, she yawned as she laid her head against his shoulder. He was wearing soft-blue, silky pajamas and smelled like tropical spice and pine. She nuzzled his chest, seeking his comfort. Actually, she wanted more. She wanted him, even though she barely knew the man. Drawing back a little, she gazed at him. His eyes were mostly gray but possessed a light brown tint that imbued them with a warm glow.

“Is making love out of the picture?” she asked softly.

“Is that what you need?” His voice sounded huskier when he asked the question.

She nodded. She did. She needed a man to hold and stroke her as he coaxed her toward a shattering climax. She’d never really had an orgasm, other than the one or two she’d snuck at the orphanage with her own hand. But she was confident this man wouldn’t just thrust himself inside her and leave her unsatisfied. He’d take time to pleasure her, and she really, really needed someone to love her right then.

He kissed her lightly with warm, firm lips then rose and clasped his hands around her waist. “My bed’s bigger. Let’s go in there.” Though his tone remained quietly reassuring, his pitch lowered significantly, and its timbre gained a measure of intensity. He spoke to her as one adult to another, rather than father to child.

Kelly gave a single nod, so he lifted her from the bed to the floor and offered his hand to steady her. Gripping his fingers in gratitude, she trotted along beside him.

Though Kathryn is relatively new to the spanking romance market, she is not new to stories where the hero spanks the heroine. In fact, most of her novels have some sort of spanking in them. However, even in Kathryn’s novels where the hero firmly believes in using spanking as a deterrent, he has no desire to cause the heroine injury and takes no delight in hurting the woman of his heart. In fact, sometimes he finds it extremely difficult to follow through on his threats or promises.

To date, all of her heroes are Dominant, alpha males who are extremely protective of the women they love. However, part of that protectiveness includes the desire for a certain amount of control. They do not suffer defiance or disobedience lightly. In fact, it is something they refuse to tolerate, and will take firm steps to ensure the undesirable behavior is not repeated.

Besides writing, Kathryn enjoys traveling, reading, attending the theatre, and is a passionate lover of animals, so much so that in 2015 a stray cat adopted her. The stray now sleeps in Kathryn’s bed. She has also recently taken up the expensive hobby of making and selling jewelry.

Roped by Vanessa Vale is releasing on MARCH 22nd!
This MFMM is all about her and roping three hot cowboys!

If you’ve never saddled up with a few Vanessa Vale cowboys, now is your chance! Welcome to Steele Ranch, where the men are hot, dominant and know what they want.

GET ROPED WITH THREE COWBOYS! 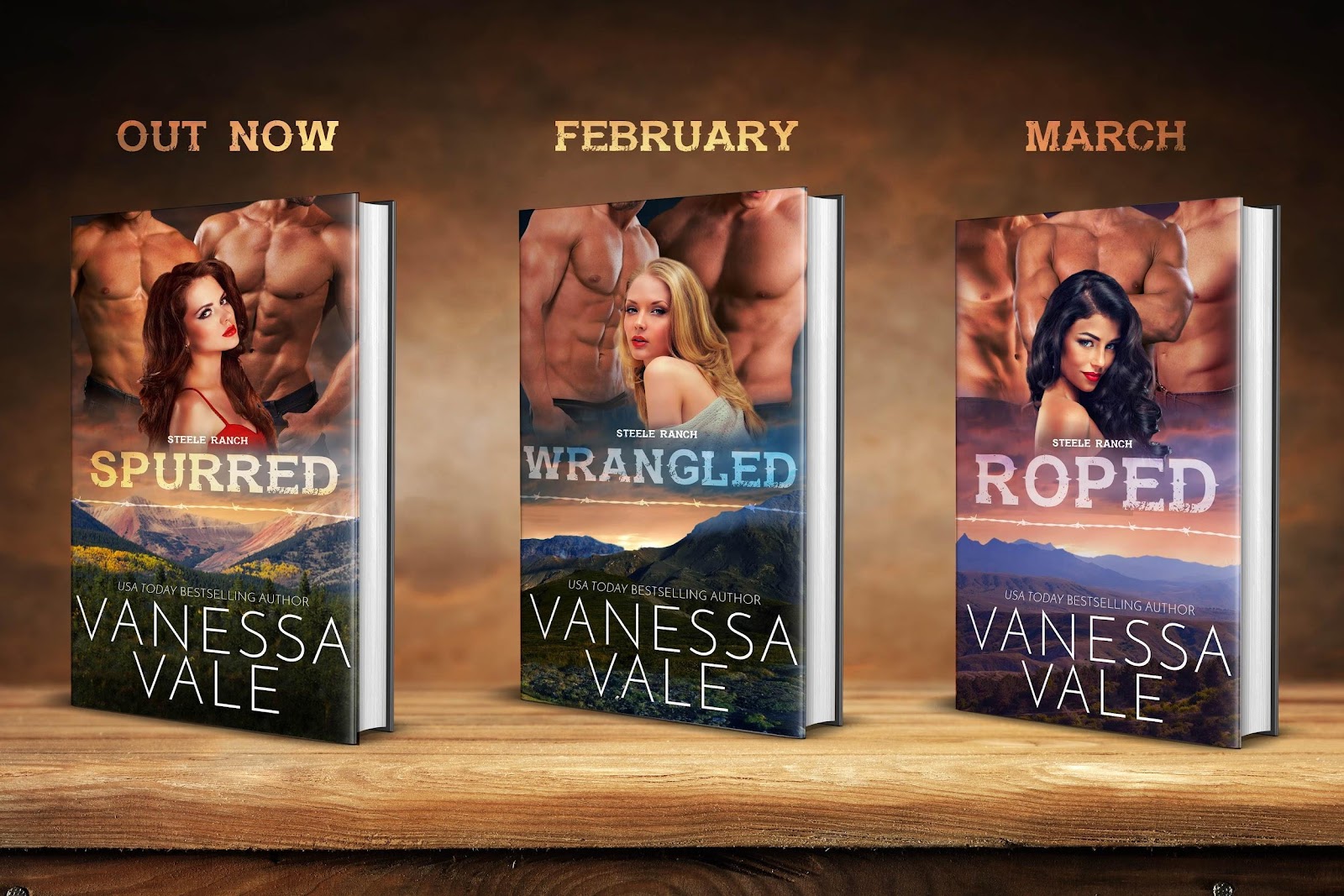 About the Author:
Vanessa Vale is the USA Today Bestselling author of over 30 books, sexy romance novels, including her popular Bridgewater historical romance series and hot contemporary romances featuring unapologetic bad boys who don’t just fall in love, they fall hard. When she’s not writing, Vanessa savors the insanity of raising two boys, is figuring out how many meals she can make with a pressure cooker, and teaches a pretty mean karate class. While she’s not as skilled at social media as her kids, she loves to interact with readers.
Connect with Vanessa!
Website: www.vanessavaleauthor.com
Newsletter: http://freeromanceread.com
Facebook: https://www.facebook.com/vanessavaleauthor
Twitter: www.twitter.com/iamvanessavale
Amazon: http://amzn.to/2h5ZDG0