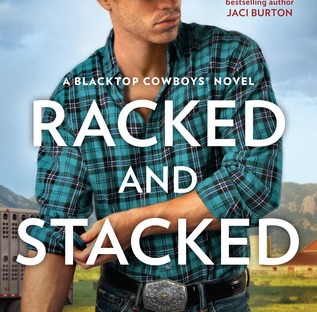 An enemies to lovers, nursemaid/roommate to lovers, work together to lovers novel. Yes, this sounds like a lot in one novel, but when you know that Larissa “Riss” Thorpe and Ike Palmer have been building to this storyline, like an eruptive volcano, than this novel is perfect.

Their obvious hate, which they had to call a truce to, all in the name of their best friends wedding since they were the best man and maid of honor. For those who haven’t read the previous novels in the Blacktop series, Lorelei James isn’t one to leave you hanging, (although I do highly recommend reading the other books because Lorelei is a master in her field) but back to my point of discovering Riss and Ike’s hate for one another like most things in life it stems from a lot of misconceptions and grudges best left in the past.

However, with their truce firmly in place and working together in the name of their wedding duties, for the first time ever Rissa and Ike both begin seeing each other through new eyes vs. the antagonistic goggles they’d been wearing for years. They shed a lot of misconceptions once their instant hate barbs and deflections go away

Now to add to the storyline, because theirs is a juicy bit of fodder that has been building for years, just ask the Mud Lillies who has the best backstory for these two, this whole enemies to lovers bit is just the cherry on top of a delicious Lorelei sundae. Her worlds are lush, character rich and always leave you feeling rode eight ways till Sunday and hung up wet and I love every moment since I’m back on Monday begging for more!

So, as I was saying, Larissa “Riss” Thorpe is known for her independent, stubborn, tomboy streak which runs a mile wide. As one of a few women in the trucking industry she’s worked hard and taken no prisoners to get where she’s at. It’s probably why Ike’s easy demeanor known as “Palmer the Charmer” irritates her so much. She’s clawed her way into everything she’s ever owned and done while Mr. Easy-Go-Lucky just has to charm his way into what he wants and life’s a breeze. She hates him on principle alone.

If only Riss knew the truth.

Ike isn’t the man everyone believes he is. His easy going personality is just that a personality that he puts on, especially when Riss is around. She brings something out in him and it’s something he can’t define, but he is hoping she can help him because Palmer the Charmer needs the get up and go that Riss has going on in her life. Perhaps having her under his roof is the inspiration he needs because, yes, if there wasn’t one more layer added to this book, it’s the nursemaid/roommate factor.

Riss has a serious accident that requires someone to care for her and due to the predicament that Ike has put himself in (don’t worry, I won’t give everything away, you’ll need to read why and how this all takes place) he is the perfect choice to become the one to help her out. As it turns out Ike also becomes the perfect choice to help Riss out when she is in a tight spot with her employer.

Two souls down on their luck breathe life back into each other, unknownst to those poor souls how much their differences would mean and inspire one another when they crossed paths so long ago. Racked and Stacked is beautiful, funny, sexy and Lorelei James excellent!!

1 thought on “Review – Racked and Stacked”

🔥🔥 COVER REVEAL 🔥🔥
Check out the SUPER SEXY cover for THE BROMANCE ZONE by #1 NYT Bestselling author @laurenblakelybooks!! You want to be sure to snap up this friends-to-lovers romance while it's on a discount $2.99 (US) ebook preorder price! This book comes fully equipped with...
The epic conclusion to the addicting Palm South University series...
The Falling Trilogy by Maya Hughes is coming to audio!