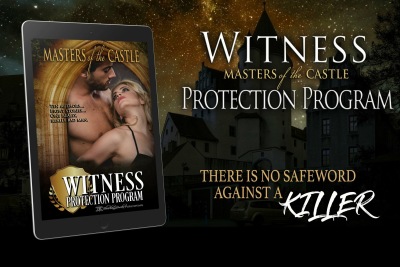 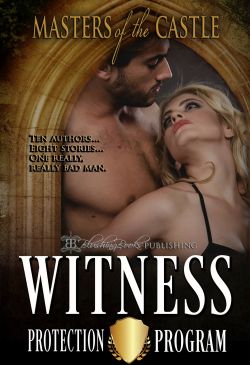 Where will you be when the bomb goes off?

When Master Marshall gets an emergency phone call, he can’t believe his ears. His cousin, Grace, has become the only surviving witness to a terrible murder and she is refusing witness protection. Fortunately for her, as far as Marshall is concerned there is no place in the world safer than a medieval castle full of protective Doms.

Unfortunately for them all, the assassin hunting her from the shadows disagrees. 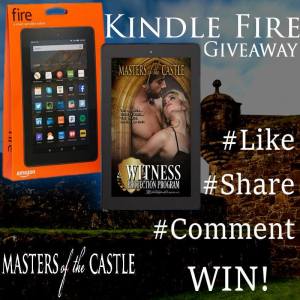 How can a blind woman be a witness? Worse…how can Grace keep from being the murderer’s next victim. Even in the Castle, in the care of a Dom who’s survived one of the world’s most extreme war zones, she’s stalked by the determined and ruthless killer. Grace and Chris have the beginnings of a hot and passionate relationship…if he can keep her alive.

Intimacy was vulnerability, and vulnerable was something Grimsley would never be.

He was tall; she was tiny. He was neat, tidy, orderly; she was… not. His life was focus without deviation and relentlessly managed by the ticking of his pocket watch; she was chaos, from the curls of her unruly hair to her little bare feet, and if she got distracted and walked into him one more time, by God, he was going to bend her over the first sturdy piece of furniture he saw. For a man who shunned intimacy, getting Eden into his arms was fast becoming all he could think about.

They say opposites attract. When it came to Eden, attract was far too tame a word…

FBI agent Dane Morgan comes to the Castle to save a life. Fawn Pike is there to take one.

Something about the raven- haired beauty catches his attention right away – but is it suspicion or desire driving his actions? Their scenes together are incendiary, their attraction overwhelming, but with the lies building between them, even the Castle’s magic might not be enough to give them a happily-ever-after.

Nothing could’ve surprised Luke more than seeing the girl he’d sworn to protect at the Castle, perched on another Dom’s lap. Anger and jealousy urged him to intervene when Carlie’s stubbornness forced him to take her on as his sub for the weekend to honor his promise to her brother to keep her safe. It takes a possible threat followed by a misunderstanding to get Luke to see what’s been right before his eyes all along.

Partners. Best Friends. Ex-Lovers. K9 unit Terri O’Connel and Nick Carrusso along with their playful pup, Champ, find themselves on a case that challenges all of their skills.

Terri fights Nick every step of the way, but when her behavior compromises their mission, he puts his foot down. Taming her will be no easy feat, but if anyone is going to get the feisty woman under control, it’s the man who loves her the most.

Will their relationship survive or will they walk out of the Castle and away from each other forever?

Two years ago, Agent Flint Turner met his dream girl. The only good he’d ever done during his undercover assignment was to help her escape one of the most vicious criminals in FBI history.

After witnessing the murder of her best friend, Holly Dansen finds safety in The Castle. When she sees the killer and his henchman, she thinks her life is over, but is determined to protect her newfound family.

But Mario isn’t what he seems, and she doesn’t know what to believe. The chemistry is bubbling between them, but can she trust him to keep her safe?

Capturing Cassandra – Masters of the Castle

She’s longed to submit to a powerful man. Her choice? The assassin she’s hunted for years.

He’s cunning, he’s wealthy and he’s dangerous. When a mafia assassin is tasked to eliminate another, assuming the role of a Master Dom within the Castle, he’s prepared for just another assignment. That is, until he meets the woman selected to become his submissive. Beautiful and intelligent, she’s also his nemesis, an FBI agent hunting him for years.

What she doesn’t understand is that after this weekend, she will belong to him.

Has the Big Bad Dungeon Master finally met his match?

Desperate to find her brother, Tasha lies her way into a job at the renowned Castle.

She has no clue about the lifestyle but she only needs to fake it for a couple of days – long enough to get the information she’s after.

Unfortunately, she gets assigned to the Dungeon, where the dark, brooding Master Eamon is watching her every move…