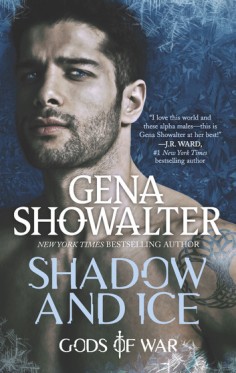 From the start I was loving the new world Showalter created. The old-world/sci-fi boy that meets today’s millennial girl is a fantastic mashup that I just plain loved.

As the first in new series, Shadow and Ice, this book had me hooked right from the beginning. It’s been awhile since I’ve read a Showalter novel and I forgot how much I love her writing. The passion mixed with just the right amount of humor is always spot on. I can hardly wait for more Gods of War.

Knox of Iviland, The God of Darkness – and no that doesn’t mean he’s Satan – his literal power is over shadows and darkness – although with his cold personality and icy way he treats his enemies some might consider him similar to the Lord of the Underworld. Shadow and Ice is a book filled with war and blood, but it is also filled with lots of humor, it’s a wonderful balance. Given Knox’s name – there are lots of adorable (p.s. he hates that word) opportunities to sex up his name that he doesn’t understand. He’s a man who is centuries years old and all the euphemisms and slangs of the twenty-first century don’t easily translate to a God of his time.

“Vale” Valerina London is just your ordinary girl out on vacation with her sister, Nola. Sure they might have been abandoned by their guide and left to potentially freeze to death in the vast tundra of the arctic, but every vacation has its setbacks, right? While venturing out to save their own lives, Vale stumbles upon the Gods who have been trapped in ice for centuries (they were mid-battle when they locked into their icy prisons and it just so happens that they begin to thaw when Vale stumbles upon them.)

Knox has more than just the gift of shadows and darkness, he also has a very intuitive insight he calls his eyaer. That insight speaks to him and has saved his life over and over again. The eyaer also tells him that Vale is necessary. As much as Knox does not want the complication of a woman in his life, he picks up the mortal – against her will mind you –  and brings her with him as he escapes his icy prison. Knox has always worked alone. Alone is good. Alone has always kept him alive. His eyaer better be right or this mortal woman will get him killed before he has a chance to win the war.

“I’m not your friend. If you trust me, even for a moment, you’ll regret it.”

Vale isn’t keen on being kidnapped, even though it saves her from dying in the freezing tundra. She is ripped away from her sister, Nola, and that weighs on her mind throughout the entire story. Vale is no wallflower and gives as good as she gets. She didn’t have an easy life growing up and she isn’t willing to just sit around waiting for Knox to ravage her, kill her, or send her home without her sister. She either wants his help, wants to bed him, or just have him go through with his numerous threats already. She doesn’t sit patiently overly well. Willing to fight for what she wants may end up getting her killed, but it also may work in her favor when the time is right.

“Considering she’d beheaded a woman, gotten stabbed, been captured and kissed by a murderer only to be kidnapped by other murderers, today’s threats were just more of the same. Part of her new normal.”

Their push and pull, their give and take, neither trusting the other as neither should because who really trusts any stranger upon meeting them especially a man who calls himself the God of Darkness and a woman who can melt the icy heart of the very god himself?

The war is waging on, who will win?

2 thoughts on “Review – Shadow and Ice”