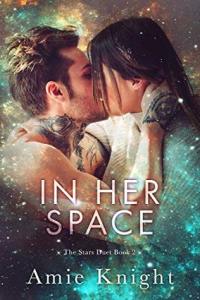 In Her Space; The Stars Duet #2 (Series)
by Amie Knight (Author)

In Her Space took so many twists, I never suspected the turns that Amie Knight took me on. It was filled with emotion and a journey that ended with enough heart to make the duet a memorable ride. The entire duet is very emotional and both books cannot be read alone, they complete each other. Beautifully written with all the feels.

In Her Space is a continuation of the Stars duet. Ten years have gone by and things have drastically changed in the lives of Liv and Adam. No longer governed by the rules of parents, bedtimes, and homework they are now young adults who have been forever changed by the events that took place while once dreaming beneath the stars.

After the horrible night when she witnessed the love of her life being beaten and she was sent off to boarding school, Livingston Montgomery has tried to leave the past in the past. She no longer is the idealistic dreamer wishing upon the stars, but instead is a realist trying to function day by day. After ten years she’s moved back home, landing the perfect job, strangely enough at the very place Adam worked ten years prior. Aside from walking through the ghosts of memories past, Liv loves her job and does her best not to think of the man she hasn’t heard from once in the past decade.

Adam Nova spent three years in prison for a crime he didn’t commit. He spent three years wondering and waiting for a word from the girl he loved. Was she okay, was she missing him, would things ever be the same? Three years came and went and Adam had his answer. He spent the next seven building his empire and plotting revenge. He would never be in the same position again, at the mercy of others. Ten years went by and he returned, ready to take down those who took away everything, but one look at the girl he shared the stars with and Adam only wanted to be in her space.

2 thoughts on “Review – In Her Space”