America’s Geekheart is adorably sweet intermixed with Pippa’s sense of humor. Beck Ryder is one of the nicest, happiest, down-to-earth famous book boyfriends I’ve ever read. You can’t help but love him for his self-deprecating humility mixed with sexy goofballness. He just might be one of my favorite Pippa Grant hero’s to date.

“One day. I want one day of being as happy about life as Beck Ryder is.”-Sarah

This sentence right here is everything!!

Beck Ryder has not only been in a boy band, but he is an underwear model, and runs a fashion empire, just to name a few of the things that make up his billionaire portfolio. To say whatever Beck touches turns to gold might be an understatement, that is everything except a blundering tweet that he meant to sent to his sister in a private message. Beck never meant to offend the female population by accidentally tweeting the wrong woman, Sarah Dempsey, who just so happens to be his sisters neighbor. However, he now needs damage control because he can’t leave his house without old ladies flipping him off or yoga classes throwing their bricks at him because he public enemy #1. He wouldn’t mind so much except the foundation he was in the middle of setting up for underprivileged youth is about to go down the toilet all because he doesn’t know how to private message. Thinking the best way to correct his mistake is to sneak into Sarah’s backyard to apologize face to face, well… it seemed like a great idea at the time, that was until Sarah tasered the stranger sneaking up to her back door.

“First rule of apologizing: Make sure she knows you’re coming.”-Beck

Sarah Dempsey is an environmental engineer who cares more about the planet, animals, saving the bees, basically anything that doesn’t involve dealing with people.  Sure, she didn’t appreciate the tweet that Beck Ryder sent to her, but more importantly she doesn’t appreciate the man creating havoc in her neat, simple life. He is famous for multiple reasons and Sarah wants nothing to do with being in the limelight, but after sneaking into her backyard and even getting tasered, he won’t take no for an answer on accepting a quiet apology. BUT. If she can get his public apology directed towards a cause she cares about…well, then perhaps the underwear model can be useful after all.

“I’m sitting in a car that’s probably worth more than my house, with a former boy band heartthrob who makes a killing putting his name on other people’s underwear. Seriously, him getting into women’s underwear was brilliant.”-Sarah

When Beck and Sarah agree to help each other out; Beck to get his reputation out of the toilet and Sarah to help the giraffes she loves, the time spent together is more than just contractual, it’s actually fun. Sarah discovers that living in the light doesn’t mean that you have to give up who you are and Beck may have finally found someone worth exposing himself around, and not just in his underwear.

Like all Pippa Grant stories, you will love the witty banter, the adorable animals, and the delicious chemistry. I so excited to see what’s next for the Bro Code series. You get a lot more interaction between the guys in this book than you did in Wyatt’s, but no matter what order they come in they are all going to be fantastic stories. 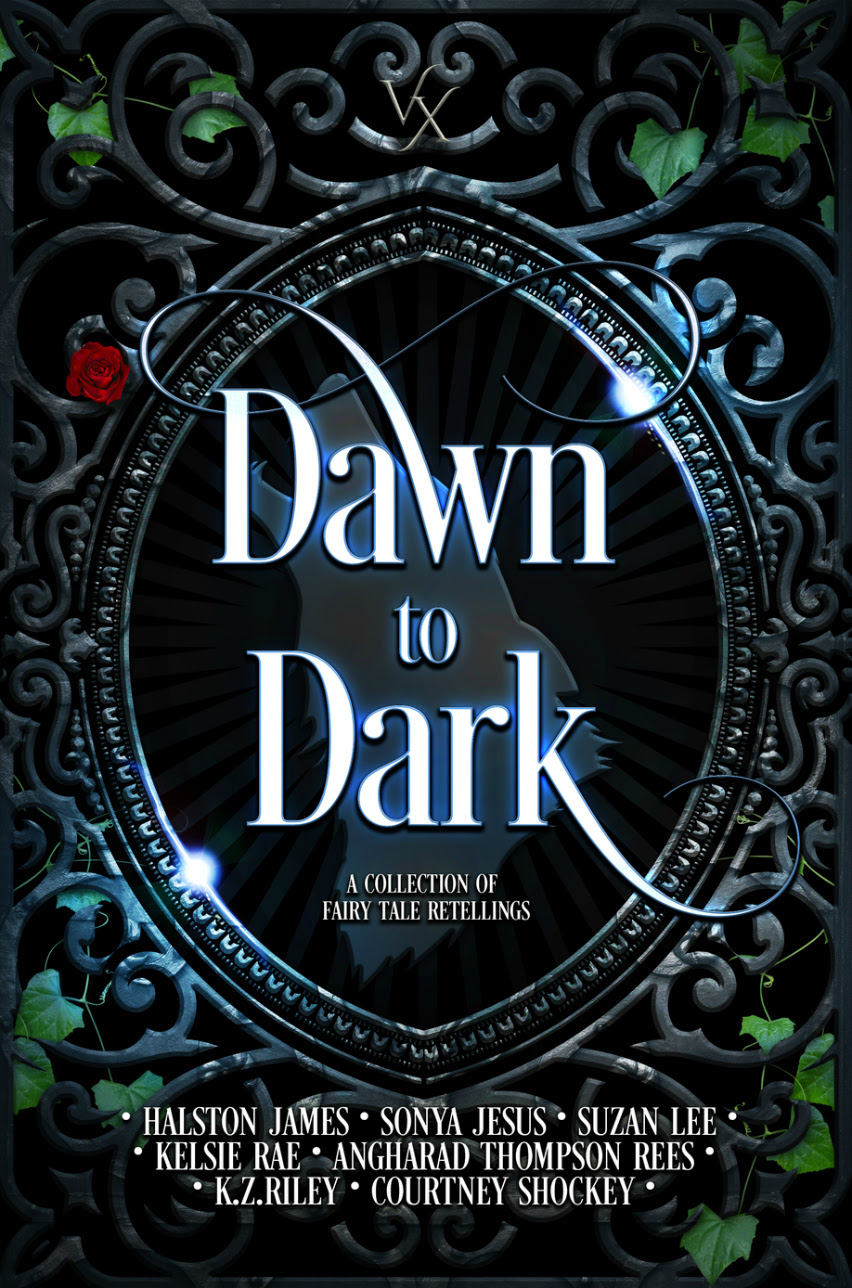 I’m sure you’ve heard the tales, we all have, but you’ve never heard them quite like this…

Seven authors bring your seven nail-biting stories. From a dark and twisted Rapunzel to a modern retelling of Cinderella, these authors will have you enthralled and howling for more.
​
Halston James retells Beauty and the Beast with a twist. “Out of the Woods” has a touch of urban fantasy and a healthy dose of paranormal romance that’ll have you turning the pages, ravenous for more.

Sonya Jesus will capture you with her dark contemporary retelling of the Little Mermaid in “Part of His World.” Follow Ari as she defies her father’s strict rules to be part of Derrick’s life.
​
​Suzan Lee has re-written a Grimm brothers classic, Snow White and Rose Red in her young adult, contemporary “Witching Woods.” With magic and malevolence strolling hand in hand, you’ll be left guessing right until the end.
​
​Kelsie Rae is best known for her sweet contemporary romances, and her version of Aladdin is no different. “The Hack”is a modern twist on a Disney favorite. One girl who prays for freedom. One man who craves a different life. One hacker with the power to change their stars. Three wishes. No turning back.
​
Take a step on the seductive side with Angharad Thompson Ree’s gothic horror retelling of Little Red Riding Hood. A paranormal romance meets psychological thriller, “Moon Bitten” is a story that promises to keep you on the edge of your seat.
​
K.Z. Riley has written “Arabella”, a beautiful young adult love story where you’re more likely to find soccer boots than glass slippers. Follow Arabella on her journey of finding herself, discovering love and overcoming fear.
​
If you think you know the story of Rapunzel, think again. Courtney Shockey’s twisted tale is about a queen who looks far more innocent than she actually is. Bring her silk or priceless gifts, and she’ll seal your fate with a sweet, gentle kiss.

I pull the hood of my red cape over my head, concealing myself against the gust of frigid winds biting with ice and spite. The skies hold the promise of more snow to come. He does not let go of my hand. And it’s not the snow concerning him.
“Blaxton,” I say—his name as sweet as honey on my recently-kissed lips. “Do not concern yourself. It is but a short walk through the woods, and yes, I promise to stay on the tracks.”
I raise an eyebrow, threatening him to contradict me. But he should know my penchant for wandering and losing myself. That’s how we met—deep within the woods in the first days of spring, when frost thawed atop the lake and his green eyes melted ice from my nervous heart.
He pulls me into his chest, his body warm against my own, tempting me to stay. Tempting me to never leave. I melt into him, lips hot as the first flakes of snow dance from the sky.
“Blaxton, no,” I say, pulling myself away with reluctance. The space between his heart and mine gapes as if the very universe could fill the hole. “I have to get back to Grandma, you know I do.”
His face drops at her mention. Grandma despises him despite his soft features, warm honey eyes and sweet, crooked smile. Though I suspect her hatred is aimed more at the threat he will steal me from her. Just as her daughter, my mother, was stolen so many years ago I can no longer picture her face. But that was different. Mother did not fall in love as I have. She was taken…
By wolves.
A perfectly timed howl echoes across the valley, carried along the land muted by snow. Blaxton raises his own eyebrow at the beast’s call and I laugh. An empty tin-like sound of hollow mirth and creeping fear.
“I’ll be fine. Tomorrow,” I say, allowing a smile to creep across my frost-numb face. “Let’s meet tomorrow, same time and place.”
Blaxton captures loose strands of my red hair in his pale fingers. The contrast startling like blood on snow. Tucking the strands behind my left ear, his fingers trail my cheek as he kisses my forehead. “Tomorrow,” he promises.

Can the ex who once broke her heart seduce her into happily ever after?

Once, Eryn Hope fell fast and incurably for Weston Quaid. And he seemed to adore her too—until she learned their love was built on lies when he walked out on their wedding day.

Three years later, West has finally won control of his family empire and fortune, but it cost him Eryn—something he regrets every day. When business forces him to return to her life and temporarily shut down her livelihood, of course she’s furious. But their chemistry is still beyond combustible. So he makes her a proposition: he’ll take care of her until her bistro reopens…if she becomes his mistress. Her mind screams no, but her body whimpers yes, yes, yes.

As soon as West has her back in his bed, their passion burns hotter than ever. So do his feelings. But can he and Eryn really recapture the love they shared? And when their bargain ends, will he be the one shattered this time or will they finally come together forever?

AMAZON CA I KOBO I GOOGLEPLAY

“You’re supposed to groom the way I want you to. It’s in the contract.”
That raises my alarm. “It’s not!”
“Oh, it is. Paragraph three, subparagraph six, clause B. You’re to be presentable to my satisfaction.”
“When we go out.” I’m positive that’s what I read. Well, almost…
West shakes his head. “I wrote three-quarters of it myself. I know exactly what it says.”
“You wrote most of that?”
He nods. “After I went home, I managed to finish my last semester of college at Columbia, then attended law school. While working as Quaid’s CEO.”
I blink. “You went to law school?”
“There’s a lot you don’t know about the last three years.”
“Whose fault is that?”
His face shutters closed as he reaches into his jeans for his cell. “I’m done arguing about this.”
With a puzzled frown, I watch as he sends a quick text. Almost immediately, he receives a reply. Then he smiles and tosses the device onto the nearest nightstand. “In the spa downstairs, Leona will clear up that landing strip at ten a.m. tomorrow.”
On one level, it’s heady that he cares about the state of my flesh he intends to use. On the other hand, I don’t understand his insistence to have me bare. “Why are you trying so damn hard to control everything, even the state of my pubic hair?”
“Because I want back the sexual compatibility we once had. I want the naked dinners and the lazy Sunday afternoons. I want the long, hot nights of lovemaking. I want—” He lets out a rough breath and shakes his head. “I want your pussy bare.”
That’s not the whole truth. I know West’s expressions too well. Oh, he wants to recreate something about our past. The question is why? And how much? But I’m guessing it’s not just the sex. Holy cow, is he looking to make me his girlfriend? His “fiancée” again? Maybe…but now that I’m thinking about it, two and two aren’t adding up.