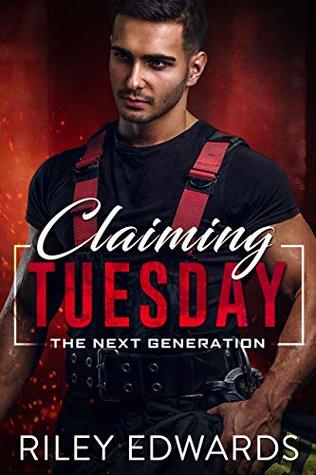 Claiming Tuesday; The Next Generation #4 (Series)
by Riley Edwards (Author)

Once again Riley Edwards captured me from the very first page and held me in her grasp until the very last page! I cannot get enough of the Next Generation!

Jackson Clark is a man who knows what he wants; determined, focused, caring, all things a firefighter should be and more. When he sets his sights on Tuesday Knowls that’s it for him, she is the woman who sets his blood on fire, his heart racing, and whom he can see a future with. Now if Tuesday would just get on board with the plan everything would be easy sailing. Although the pushback she gives is also what attracts her to him as well, so he really wouldn’t change a thing about her.

Being loved for your superficial beauty can leave a lot of emotional baggage. When you top that with abuse of trust from people in your inner circle, you begin to live in a very small circle of people and allowing people in becomes very difficult. Tuesday hasn’t allowed anyone in her circle in a very long time, so when Jackson breaks through and doesn’t allow her to give excuses for kicking him back out, she doesn’t know how to handle the sexy fireman.

When Tuesday’s life begins to spiral out of control, she soon learns that the Clark family and his entire extended family is more than she ever could have imagined. Never having experienced a caring environment of her own, Tuesday doesn’t know how to handle the love and support they all all show each other. Jackson is about to make sure she never forgets the feeling of having people at your back and more importantly the love he can give her everyday for the rest of her life.

Jackson Clark is such a beautiful human being, I love that he looks past the outer package and a lot of the crankiness Tuesday throws at him, until she finally realizes he’s someone she can trust. I can empathize with Tuesday on so many levels she broke my heart, I understand the pain she faced with allowing people in. Too often in my life I heard the comment, “Wow, you’re really nice. I didn’t expect that.”  Um, thanks for the backhanded compliment. This is not my story, but all I’ll say is I felt for Tuesday and completely adored Jackson.