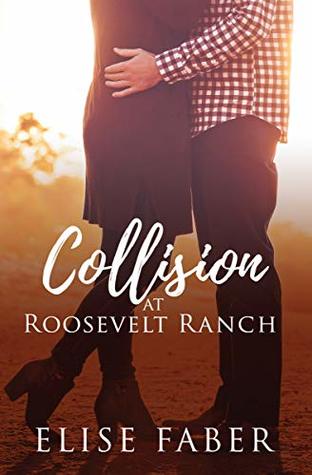 There is something about a small town romance that I love so much and Collision offered up all the small town feels.

This is the first book I’ve read by Elise Faber, which means this is also the first book in the Roosevelt Ranch series I’ve read as well. I had no problem reading this as a standalone, but I also look forward to reading more from Elise and meeting more characters from this series.

Haley thought she was going to die the night a deer jumped in front of her car. The SUV following behind her didn’t have quite enough time to stop before slamming into her car, but given the remote location of her house it was lucky for Haley that Sam was there to call in help. Or perhaps unlucky given that it was Sam that collided with her car?

Haley definately considers it unlucky when it is Sam who peers into her drivers side window after being struck. She would have prefered death by deer than having her high school crush see her wounded along the side of the road.

Sam feels awful for causing the wreck. Technically it was a deer, but Haley has a broken ankle, a concussion, and she lives alone. Not the best case to take care of oneself. He refuses to leave until she’s better, no matter how stubborn she’s being in taking his help.

He may never have noticed her when she was a tag-a-long years ago, but he can’t help but notice her now that she’s all grown up. He’s only there to help her get back on her feet, but something else is pulling at him to make him stay.

Can the past, living in a small town, ever be erased? Could Haley and Sam ever start something new?

Collision at Roosevelt Ranch by Elise Faber is coming soon on May 5th!