“It’s got a Jill Shalvis/SEP vibe and I had a smile on my face all the way through. Loved every minute.” – Kate Meader, USA Today bestselling author

For five years, PA Cecilia Morgan’s entire existence has revolved around playing “left tackle” to former NFL quarterback Wade Carter. She’s so good at her job, the man can’t even buy his own condoms! Well, today she’s giving the Worst-Boss-Ever her notice.

To say CC’s announcement was a bombshell is an insult to bombs. And horribly timed, with his publisher breathing down his neck. Not too many things defy Wade Carter. Well…except his mother. His PA. And the blinking cursor of doom.

Time to call an audible.

CC is gobsmacked. Three months in his small hometown—somewhere devoid of “female distractions,” he says—while he finishes his book, and he’ll cut her loose?! And he thinks a cowboy hat and dimpled smile and she’ll just say yes? Penalty flag.

Wade can’t believe CC and the council arranged busloads of single women to visit their dying town. She never gives up. But three Super Bowl rings prove he’s no quitter, either.

But then their fighting starts to feel a whole lot like foreplay. What’s a quarterback to do when he realizes he might be falling for his left tackle?

Time to throw a Hail Mary. 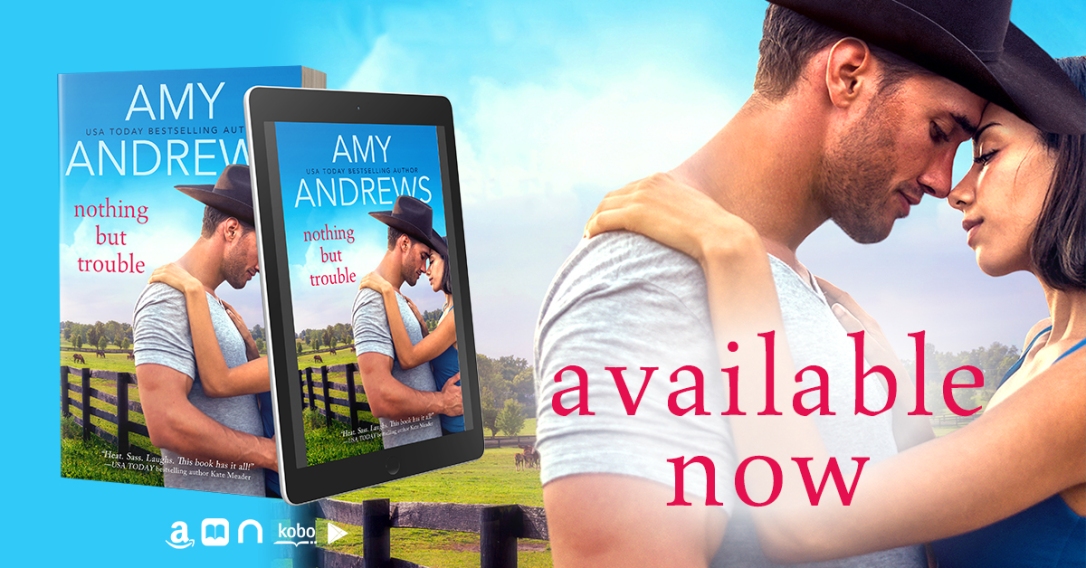 Read Kay’s Review: Nothing But Trouble

“And that’s where I had my first kiss.”

CC tuned back in and focused on where Wade was pointing. It was the football field, a lush bright green amidst the faded wooden bleachers and the peeling goalposts.

“Right there under those bleachers.” He smiled and sighed. “Kathy Williams. I became a man that day.”

He laughed. “I suspect it was terrible at first.”

He shook his head, and a tiny little hitch near CC’s heart snuck up and surprised the hell out of her. Her gaze was drawn to his profile, to the tilt of his lips. Usually those lips just exasperated the hell out of her, articulating his ridiculous demands, but, she had to admit, he had a great mouth. Kinda made a girl wonder what other demands lips like those could make.

Not that she’d ever wondered. Nor was she about to start. Crushing on her emotionally unavailable boss would be dumb. Especially when she was only a few months off never having to see him again.

“I fumbled it badly, went like a bull at a gate. She pulled away and said, ‘softly, Wade,’ and then…”

It was hard to believe Wade had ever fumbled anything. His had been the safest hands in the NFL. And he’d obviously improved beyond kissing, if that thing he did with his tongue was as good as Annabel had said.

“Well…” He smiled, obviously still caught up in the memory. “Let’s just say she was patient, and I’m a fast learner.”

“I was fifteen. She was seventeen. The head cheerleader.”

CC rolled her eyes. “How very Riverdale of you.”

Amy is an Aussie author of hot contemporary romance who believes in multiple orgasms, mighty wangs and happily ever afters. She’s been penning them for over twenty years and has 70+ books to her name.

As well as unforgettable characters and great sex you’ll also be treated to some laughs and a dollop of quirk because Amy doesn’t seem to know how to write a book without a bit of both. You might also cry a little because there’s nothing she loves more than a laughy-criey book!

She also loves sunsets and rainbows, unicorns and mermaids, booze and travel. And her home that overlooks the ocean. She may also happen to believe she was a Roman goddess in her past life because its the only thing that explains her adoration for all things Italy.