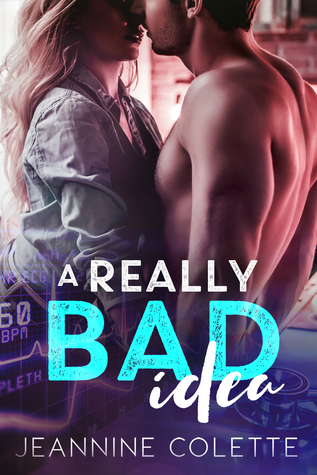 This is a best friend to lovers romance that is told strictly in the female POV, but it is also so much more. There is no drama or cheating or anything along those lines, but A Really Bad Idea is filled with humor, friendship, family, emotional moments and some romantic, sexy times too. Basically, this story is simple and lovely.

It’s been awhile since I’ve read a book in one POV and yes, it can be frustrating, but like life, we don’t know what those around us are thinking, but I also forgot how richly detailed and beautiful a good storyteller can be in that POV. Jeannine Colette is one of those crafted writers. Meadow and Christian embark on a journey that not many best friends willingly go down. With the story told completely in Meadow’s singular mindset every subtle nuance of body language, every word was analyzed, and I scoured between the lines to find the hints at what was going through Christian’s head. I was so drawn into Meadow’s head that I completely forgot most times that I was reading a single POV. This was a brilliantly written book!

Meadow has achieved every dream she’s ever wanted, except one…becoming a wife and a mother.
When her best friend, Dr. Christian Gallagher suggests having a baby with her she doesn’t exactly jump at the idea, but she doesn’t throw it out either. They have been friends for so long because they haven’t crossed boundaries.
Ever.
So when Christian says he wants to have a baby with her and he also wants to do it the traditional way, she has some trepidation. He’s not offering her love, romance, and a happily ever after. He’s offering her a way to have a baby. They are friends and he also isn’t one to slam and run.
Yes, she can feel her biological clock ticking and yes, she knows she messed up by marrying the wrong man and wasting years of her life when she caught him cheating, but is she willing to throw out another chance at finding love in order to have a child with Christian?
Can she go through with his traditional idea, three dates before being intimate, and still keep her feelings unattached, still keep Christian friend-zoned?
This might be a really bad idea, or a really, really good one.

2 thoughts on “Review – A Really Bad Idea by Jeannie Colette”