We’re celebrating the audiobook release of AUSTIN: A Sexton Brothers Novel by Jeannine Colette and Lauren Runow!  One-Click your ebook for #99cents then download the audiobook! 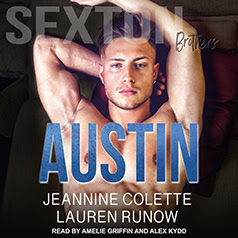 Austin Sexton is a bad-boy media mogul and heir to the Sexton Empire. On the outside, he’s a whiskey-slinging bachelor with the world on a string. Problem is, strings break easily.

Deep within lies a war hero who refuses accolades. He buries his pain with his vices, and against my better judgment, I’ve become one of them.

No matter how hard I try to push him away, his secrets draw me in. This man, who appears careless, has passion. If I were looking for someone in my life, I could see myself falling for a guy like him.

Good thing love is the last thing I’m looking for.

*The Sexton Brothers novels are stand-alone books that can be read in any order. 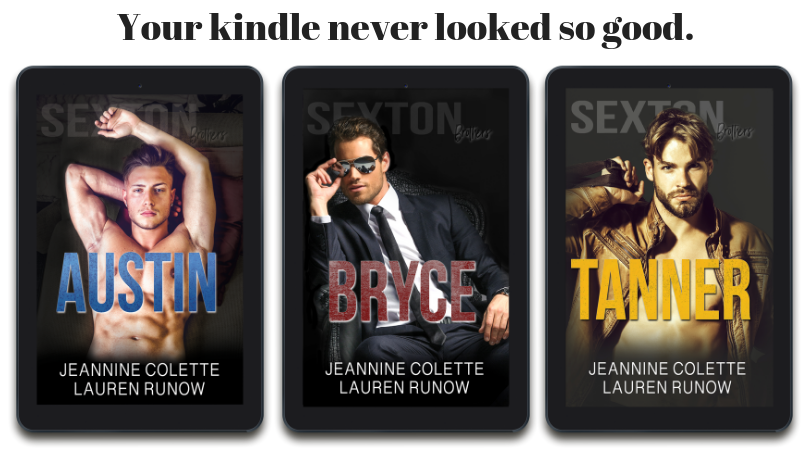 Lauren Runow is the author of multiple Adult Contemporary Romance novels, some more dirty than others. When Lauren isn’t writing, you’ll find her listening to music, at her local CrossFit, reading, or at the baseball field with her boys. Her only vice is coffee, and she swears it makes her a better mom!

Lauren is a graduate from the Academy of Art in San Francisco and is the founder and co-owner of the community magazine she and her husband publish. She lives in Northern California with her husband and two sons.

You can also stay in touch through the social media links below.

Jeannine Colette is the author of the Abandon Collection – a series of stand-alone novels featuring dynamic heroines who have to abandon their reality in order to discover themselves . . . and love along the way. Each book features a new couple, exciting new city and a rose of a different color.

A graduate of Wagner College and the New York Film Academy, Jeannine went on to become a Segment Producer for television shows on CBS and NBC. She left the television industry to focus on her children and pursue a full-time writing career. She lives in New York with her husband, the three tiny people she adores more than life itself, and a rescue pup named Wrigley.

Jeannine and her family are active supporters of The March of Dimes and Strivright The Auditory-Oral School of New York.
http://jeanninecolette.com/