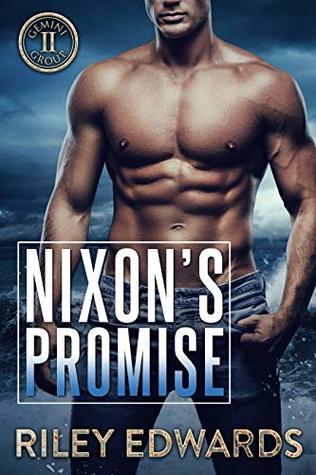 If Riley Edwards has asked me for ingredients for what I love in a novel…she added all of my favorites in Nixon’s Promise.

This is one of Riley’s best books to date! Filled with heat, suspense, chemistry, an alpha male who isn’t over the top, but completely yummy and insta-love-worthy. Nixon’s Promise is one to add to your TBR now so you have it ready to read when it releases.

Nixon Swagger is a former Navy SEAL. He’s home trying to repair and update his family home and farm from years of neglect. His father passed away several years ago and unfortunately his land has sat vacant since. Nixon doesn’t mind hard work, but he appreciates the helping hand of his neighbor’s brother, Zack, a teen who has also found himself recently without parents. Zack is living with his older sisters not too far from his own farm and Nix really doesn’t mind Zach’s help especially when it comes to Zack’s oldest sister, McKenna. Nix is all too willing to provide male guidance to the teenage boy and helping out McKenna, who has her hands full raising her younger siblings, if it means spending time with her. She is smart, beautiful, and so giving. It isn’t long before Nixon finds he wants to spend any spare moment in her presence.

McKenna Wilson has her hands full and is all too grateful when her sexy neighbor offers to help. She has been beside herself in raising her much younger brother and sister. Actually, lost doesn’t even begin to describe her emotions on taking on this monumental task. So when Nix steps in on numerous occasions to help, give a guiding hand, just be support to lean on, McKenna lets him, especially when she notices how Zack looks up to him as a role model. Now if only she could get her sister on board and life would be great.

Aside from the family drama, Nixon is approached from one of his former teammates to help the government stop a terrorist attack, in an off the books way. Nix is highly intrigued, knowing he’s been wanting to form his own company once he got his life in order and like they say, there is no time like the present…and so the Gemini Group is formed.

I don’t want to give more away, because you really should experience the suspenseful plot yourself….sooooo….

Nixon’s Promise is the origin story, per say, as to how this group is formed. It’s brilliantly put together, along with introducing the other members of the Gemini Group and the small town in which the base of operations will take place. McKenna, Nixon, and her family will play pivotal roles going forward…I have a feeling…so if you love Riley’s books I’d suggest picking up this one, especially because it’s sooooooo good!

One thought on “Review – Nixon’s Promise by Riley Edwards”