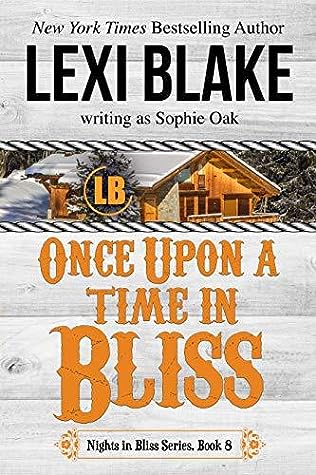 Once Upon A Time In Bliss; Nights In Bliss #8 (Series)
by Lexi Blake writing as Sophie Oak (Author)

I read my first Sophie Oak book almost ten years ago. Back then I didn’t know Sophie Oak and Lexi Blake were one in the same person, but once I did learn that little tidbit, I can’t say it shocked me to know that two of my favorite authors were the same person. It did however, help solve the mystery that had been plaguing me where Lexi’s series’ took off, but Sophie’s world sat on the back burner with no new books being published.  As a fan that devoured everything that Sophie Oak had written I was quite distraught when Sophie’s books basically vanished and she stopped writing them. Again, little did I know that my favorite author/s had been with me all along, just hiding in plain sight.

It wasn’t until 2018 that once Lexi received her rights back on those original books that she was able to spruce them up, add a new chapter or two, and really claim both of her names (see the new cover listed above vs the old listed below). This was a happy day for a huge fan of both Lexi and Sophie’s worlds. Not only did Lexi spruce things up, she was able to do it by blending in her already beloved worlds. This wasn’t just good news, this was GREAT news!

Here is the old cover for nostalgia’s sake… 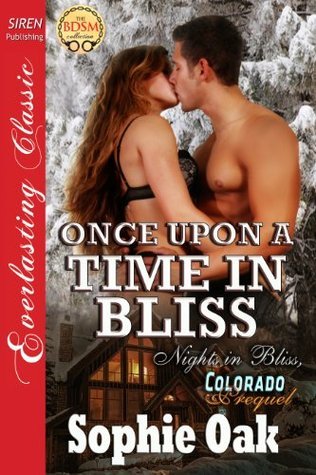 Not only has she brought new life to her well loved Bliss characters (and Siren series), but she has been incorporating Bliss into her other series too. Ian Taggart fits right in with many of the fellow residents of Bliss, along with those in the Siren series. The connection between these worlds is easy to follow when you know and love all the characters, hence this newest update to Once Upon A Time in Bliss. A young Ian makes an appearance, along with many other beloved characters, making this one of my favorite Bliss novels.

Henry Flanders has always been an enigma to the residents living in Bliss, CO, but for those who have read the Masters and Mercenaries series you may recognize the name John Bishop. A ruthless CIA operative. Where did he go and how did he disappear?

Bliss is a protective town, full of odd people, but people take the task of protecting their own very seriously. If Henry has secrets he wants to keep hidden there is no better place to hide them then in Bliss. Henry/John has seen so much death he has no idea how to live a life outside of the CIA. He believes there is no out aside from death himself, but if there was a way he’d want to spend it living beside the one person who has ever made him feel anything, Nell Finn. Nell is the only person he’s ever felt the need to settle down with and live out his days in somewhat normalcy. Or at least Bliss normalcy.

Nell Finn is a vegan, protesting, anti-killing, basically anti-everything that John Bishop has done with his life-person. However, she is drawn to Henry Flanders like a moth is drawn to a flame. His domineering presence calls to her, which goes against her normal feminist thinking, but she’s okay with it because Henry seems to need her loving protection. What she also needs is someone looking into the destruction that happened to her home. Yes, she’s used to receiving threats, she gets them all the time, no one exactly likes being protested against, but this time someone trashed her house and she isn’t exactly sure who. Henry may only be in town for a few days, but he’s determined to help. As much as she believes in doing things for herself, she appreciates his help and his good looks don’t exactly hurt either.

Once Upon A Time In Bliss is a go back in time book, which has honestly been so much fun to read. The book is filled with characters both from Bliss and Masters and Mercenaries before they found their mates, before chaos rained down on their worlds and caused some of them to become hardened. This is a story before everything began and yet if you know both worlds we know what happens to each person Henry and Nell run into. In truth normally catch up in any book is my favorite part, but this is even better because I loved chuckling at some of the silly things people said, knowing what was in store for them. It was also whimsical about how carefree they were before situations changed their emotional state. There are so many changes to come down the line, this story really hit home about what hasn’t changed yet.

I loved Henry and Nell’s story, because they are a huge dichotomy of love interests and have always made me laugh. Through every Bliss story I wondered how they ended up together, question answered. Plus, this story is a wonderful trip down memory lane.

If you love both the Bliss series and the Master and Mercs series, this book is a MUST read!!