Back in Bliss; Nights in Bliss #9 (Series)
by Lexi Blake writing as Sophie Oak (Author)

For fans of this series, people were waiting for Logan Green to finally get his HEA. I was one of those people as Logan became a character that was near and dear to my heart. I fell in love with Bliss almost a decade ago and I love rereading each book as it’s like revisiting an old friend.

Back from the beginning, Logan was the goofball, never wanted to grow up or take anything seriously, but also so super sweet you couldn’t help but like the character. In a town full of menage pairings, BDSM, killings that equated to large body counts, a nudist camp, alien encounters, and other strange events I’m sure I’m forgetting, Logan was the eternal optimist among the strange and bizarre. Known for his famous line of “Please, don’t tell my mom’s” when Logan usually did something dumb or found himself in trouble, that particular quote always put a smile right on my face.

Everything changed when that innocent trouble turned to brutalization and Logan was traumatized from the events that occured when he discovered the world wasn’t exactly nice and heroes don’t always spring to life like in the comic books he used to read. I think I can say it broke every readers heart to see Logan change from the lanky kid to the hardened man, but it was the necessary transformation that lead us to the Dom he became in Back In Bliss.

As much as I missed his goofy smiles and comedy relief, his hardcore Dom was uber sexy. Logan finally came into his own and like a lot of Bliss stories he wasn’t alone in finding romance.

Seth Stark is Logan’s best friend. Every summer Seth returned to Bliss to spend the summer with his grandfather, but more importantly he spent it with Logan. At some point in their youth they realized they wanted to find a woman and share her together. It was a thing that just was, like knowing you wanted children or not. However, things progressed a little differently than Seth had planned and when they didn’t attend college together or even spend the last few years of their lives together, Seth, being the planner that he was, began to move the chess pieces anyway and counted on Logan playing along. He wasn’t quite prepared for the changes in Logan or even for hurricane Georgia.

Georgia Dawson is in love two men. The Prince in a suit – Seth and the Beast in khaki’s – Logan. They both are different and both of them make her heart melt. The only problem, Seth wants forever and Logan only wants right now. These men were best friends, how could this ever work if she is only viewed as a play thing. If Seth has his way she’d be a china doll taken out and used on occasion, she’s been there, done that, she wants more from him. She also wants Logan for more than just a few days, but he doesn’t seem willing to give it. How can she bridge the gap between these two men who seem to need her? She’d give them anything if they only work together.

Georgia sets about to bring these two men together, Logan hopefully to heal his old wounds and Seth down to a level where he gets out of his own head once in awhile. She falls in love with the town, like we all have at one point or another. Lexi/Sophie does a great job through Georgia’s eyes introducing us to Bliss locals, hangouts, and customs. While through Logan’s tortured past memories we get glimpses of who he was and meet his friends/families and even new children living in Bliss as well.

Back In Bliss is a homecoming, a healing, and a sensual loving relationship between people who really care for one another. I’m so excited that Lexi is updating and bringing this world into her other ones and I can’t wait to see what happens next in one of my favorite towns. 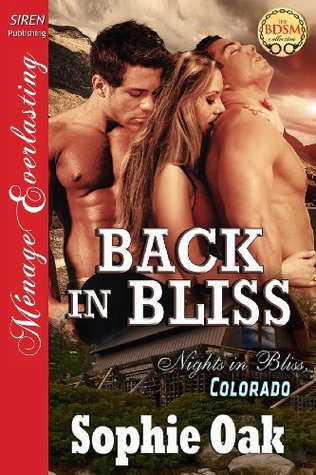 Here is a look at the old cover back from 2013 vs. the new updated version listed above.