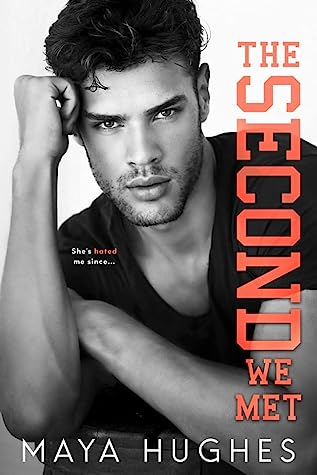 The Second We Met; Fulton U #2 (Series)
by Maya Hughes (Author)

An enemies-to-lovers, new adult, sports romance. The Second We Met is full of spicy back and forth heat, but also lots of emotional chemistry. Nix and Elle connect like two missing pieces of a puzzle.

Phoenix “Nix” Russo is a great guy. He is opposite of what you would think a college jock to be. Basically raised by his grandfather in the back of his restaurant, while his famous NFL father was on the road The little time Nix did get with him was sought seeking his love and approval. Most of the time you see Nix with his father, it’s a strained relationship at best. Nix wonders if he will ever be good enough even if he reaches the NFL, which broke my heart time and time again. After winning the championship in his senior year, with the draft looming, Nix only has a little time left to enjoy his freedom. Yes, sometimes the parties at his house get out of hand, but that’s no reason to call the cops on him time and time again, but the pink menace across the street seems to think they go hand in hand. One night it goes too far and handcuffs get involved and now he has to clean up his image before the draft.

Elle Masterson is a humanitarian, which is wonderful trait, but the reasons behind why she works so hard isn’t quite so loving. She wants to beat her ex-boyfriend and also needs to payoff her mounting debt before the end of the year. Once she does that then her life can focus on everything good and fun. Until then she has absolutely no time for either of those things and yet they seem to land on her doorstep or across from her doorstep continually. The bane of her existence, Nix Russo and his loud house parties make her life a walking nightmare and they have from the second she met him. One night she was especially exhausted she did what she always does, she called the cops when the noise level was high and she couldn’t sleep. Elle didn’t feel too bad when she saw Nix getting arrested, well…not horrible anyway. That is until he shows up at one of her humanitarian work sites to work off his crime. Maybe she should have rethought calling the cops.

Once Nix and Elle put the nailguns down and stop fighting they find they have more in common than they ever realized, especially when they work together. Who knew?

I love the moments when they are working together helping others. They are my favorite parts of the book. There is a lot to take away from reading a book like this, especially about getting involved and helping others. We all have something to give even if it’s small.

This is the second book in the Fulton U series, but is also a complete standalone. Maya does a great job of connecting both prior and future characters in this book and even though you get to meet these secondary characters who enrich the story, at the heart of it all is Nix and Elle.