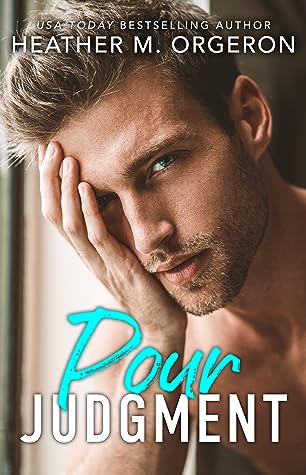 This is a great tagline. Heather M. Orgeron delivers the comedy mixed in with lots of steamy romance in her newest book. Pour Judgment is another hit in her lineup of great romantic comedies!

Rhett Taylor is a big country music singer and seems to have his pick of women, but in his string of meaningless hookups he has yet to find “the one” that is until he meets Korie Potter.

Korie grew up in the industry, her famous father is the one who actually gave Rhett and his band a start in the industry, but Korie has no patience for the lifestyle that comes along with the price of fame.

Korie saw what fame did to her parents marriage. Her mother was heartbroken over and over again. The infidelity of her father was famous while her mother gave up everything to wait dutifully at home. Korie doesn’t want that for herself and being with a man like Rhett is only setting herself up for heartbreak. She tries to stay away from the sexy rockstar, but saying no and actually following through are two very things.

Rhett can’t stop thinking about Korie and when he finds out she’s attending a singles camp, Camp Pour Judgment, he follows. It’s a week of games, drinking, and consensual hookups and the best part of it all, no electronics are allowed. The possibility of his famous face being leaked are virtually nil. That is until camp is over and someone released a doctored photo of him proposing to Korie. Well this relationship escalated quickly. Instead of having the photo taken down, his devious mind quickly turns it to his advantage. If Korie thought their week at the camp was over and a one time thing, she is in for a surprise.

Pour Judgment is fun and so creative, it really made me wish I was twenty years younger so I could participate in all of the games Heather came up with. This romance is one to TBR right now!