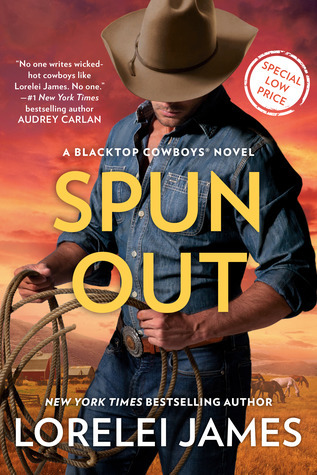 Lorelei James is not only a one-click author for me, but one of my all time favorite authors. Every reason why to both of those reasons is contained in Spun Out. Her books contain every element that make her characters and stories come to life and feel like I’ve come home. Filled with emotion, passion, meaning, and people you won’t soon forget Spun Out is a book you need to read.

Although this is the last book in the Blacktop series, Spun Out is different than the previous books (and I say that in the best way possible) and can be read as a complete standalone. Yes, there are mentions of previous characters, but Lorelei fills in the blanks of who they are (because even for myself, it’s been a few years since I’ve read some of the books and I needed a refresher so don’t worry because you will be able to follow along).

Streeter Hale (next to his brother Tobin) is probably one of my favorite characters in this series. He’s a single father raising a strong-willed, intelligent child, Olivia. Between losing his wife, his livelihood (which included a falling out with his father and older brother), and raising his daughter with almost “Sheldon Cooper” like needs, he barely makes it through the day. When Bailey, Harper’s sister, arrives for the summer and tells all the parents who live at Split Rock Resort that their child are out of control (he’s somewhat thankful it’s not just his, but at the same time knows something must be done). The parents make a decision and decide that Bailey is just the woman to wrangle their kids in.

Sergeant Bailey Masterson is straightforward, to the point, and I love that she sees not only her one nephew, Gage, who is third born getting lost in the mix of his family, and she makes special time with him, but also that she understands Olivia, Streeter’s daughter right off the bat and doesn’t discount her as a brat (well maybe headstrong, but somehow she sort of admires it). When Bailey is asked to begin a Boot Camp for the children who live at Split Rock Resort, she isn’t quite sure is she is qualified, but when they offer her free housing where she isn’t living with her sister, husband, and four children anymore, the deal doesn’t sound half bad. Besides if it means getting not only her nephews and the other children to behave better, it has to be a win-win.

Living next to the hot, single dad and his precocious daughter isn’t exactly what Bailey had in mind, but she makes the best of it, especially as the summer moves forward and her living arrangements come with benefits.

Bailey and Streeter together are so hot…I think what makes it combustible is how Bailey helps Streeter find himself again. He’s been lost for so long that she brings his self confidence and personality to the light. She is sort of instrumental for several people in finding themselves and that is her gift. I’m not sure she is entirely aware of it, but she doesn’t share too much about herself and I’m not going to give away as to why she keeps it locked up tight.

Spun Out is the conclusion to a great series, and like I said above, it is different than the others, but in the best possible way. I really hope Lorelei continues with the next generation of Split Rock children (you get the chance to meet and know several, like Olivia, in this book), but time and her muse will show us what direction she will take us.