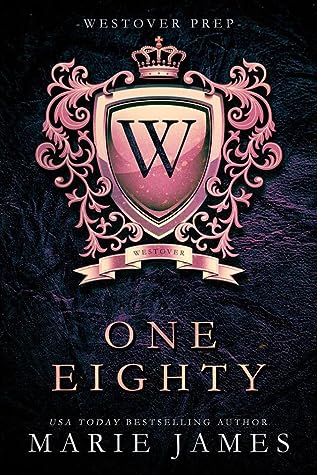 One-Eighty; Westover Prep #1
(A standalone within a series)

A new twist on a bully romance. Dalton is unlike any bully I’ve read yet. A boy who not only instigated the bullying of a young girl, but also grew and festered those around him to be just like him. This is a person to dislike on every level and yet this is who the hero of the story is. Marie James set a challenge and I was curious to see how it played out. Could the ultimate villain be redeemed?

Piper, also known as Bloody Mary, thanks to Dalton, has been bullied her entire life. How the sweet, next door neighbor has put up with it for as long as she has is the ultimate mystery, but it is now senior year and she is looking forward to eventually escaping the monster who lives next door.

Dalton is the king of the school and everyone follows his lead. He’s always picked on Piper so everyone else does as well, that is until an almost fatal car crash wipes his memory and he has no recollection of anything past the age of five. He never once recalls bullying Piper and all he sees is a gorgeous girl living next door. Why do people keep telling him he’s such a bad guy? All he wants is to get to know his next door neighbor.

What would you do to have a clean slate of any mistake, wrongdoing, or blunder? The only thing is everyone else around you remembers exactly what you’ve done and you don’t. The one person you want is the one person you can’t have. This doesn’t make sense to your clean-slated mind. Perhaps that clean-slate doesn’t look so good anymore. Or are you willing to show that you are a new person?

This entire concept is very well done on both sides of that “what if”. How can you trust the ultimate villain and how do you earn that trust when you’ve been the villain?

One-Eighty will dig deep into a lot of issues you may not feel comfortable touching, but they are real issues that happen to teens today. Come out of the other side of the story and I think you’ll be happy that you stuck with Dalton and Piper and hopefully see more of what happens at Westover Prep.

PIPER
Arrogant, controlling, and an absolute jerk.
He’s everything I loathe, and everything I want to forget.
But he doesn’t remember a bit of it.
One accident, one misstep, changed everything.
Changed him.
Now, he’s different and unbelievably sexy.
But I refuse to fall for a bully.

DALTON
Sexy, smart, feisty, and perfect.
She’s everything I want, and nothing that I remember.
What she says I am, I refuse to believe.
For her, I will be anything.
I will do anything.
Even destroy the bully from before.

Fries Before Guys; KPD Swat Generation 2.0 #2
(A standalone within a series)

The most emotional SWAT book to date. I shed so many tears throughout this entire slow burn, age-gap romance.

Avery seriously cannot catch a break. We find that she has lost both of her parents, she’s bullied at school, she’s about to lose her home, and her car is on its last leg. That is just to name a few of things that are going wrong in her life. One of the few things that bring her joy is her photography and the one man she enjoyed taking pictures of, Derek Roberts. It’s too bad he constantly reminds her that he’s too old for her. She will just have to daydream about him, sort of like the rest of her horrible life being different than it really is.

Once Derek meets Avery he can’t seem to stay away from her. The world seems to keep putting her right into his path. He knows he shouldn’t desire someone so young, but he can’t seem to help himself. When he finds out that she’s being abused at school, she’s about to lose her home, and basically that her life is just horrible, Derek seems to find himself by her side even more. She becomes his obsession. One he wants to make a fixture in his life.

Avery’s story will break your heart, it certainly broke mine. For a girl so young to experience so much loss and yet she keeps getting right back up and fighting is extraordinary to read. Derek is the perfect man to be by her side through the hard hitting days, but also the woman he needs to settle his soul.

Sometimes people come into a person’s life and make their heart skip a beat.

Those people are called cops.

Well, one cop in particular.

A SWAT officer for the Kilgore Police Department, to be specific.

The first time Avery Flynn saw Derek Roberts, she was photographing him for the first annual Kilgore Police Department SWAT calendar. He was leaned back in his squad car, shirtless, and giving her a smile that was completely between them. A smile that hinted at what he wanted to do to her later.

When she scrounges up the courage to ask him out after the photoshoot, he laughs in her face.

Well, screw you, too, Mr. February.

She was a mousy girl who dressed like a twelve-year-old girl. Her tight leggings, extra baggy Star Trek t-shirt denoting her a Klingon captain, and her surprisingly clean Chucks didn’t leave much of an impression.

Now, the outfit that she was in weeks after he rebuffed her? Yeah, now that caught his attention.

Too bad that happens when he’s trying to save her from what’s sure to be death thanks to an unhinged native Texan who’s convinced she was the reason he lost his last chance at a million dollars.

When he tries to save her, she tells him she’d rather take a cattle prod to the forehead than go anywhere with him.