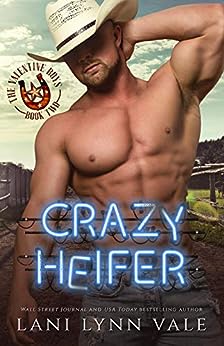 Crazy Heifer; The Valentine Boys #2
(A standalone within a series)

This was my first chance to meet the Valentine family as I’m still catching up with all of Lani’s books, but I was delighted to meet them in Crazy Heifer and look forward to reading more about the rest of the family in future books.

I had no trouble jumping right into the big family and whether you’ve read about them before or are joining them now, you will discover they have quite a background, but their family history does not checker their future. The Valentines are a solid family and fun to read. I really adored getting to know this big family and the new additions to the Kilgore world.

Callum and Desi may not have grown up together, but when Callum Valentine sets his sights on Desi he quickly knows what he wants and becomes addicted to her. She is exactly his type of woman, a curvy redhead. When he spots her sitting alone in a restaurant he notices her getting harrased. He doesn’t hesitate to come to her rescue and the rest, as they say, is history.

Desi hasn’t been free from her ex for long, but he doesn’t seem to want to leave her alone. Turning up over and over he likes to harass her, but when the sexy Callum Valentine helps her out she finds it hard to say no. Especially when he continues to show up to help her out over and over. Is this fate stepping in and should she listen?

I love that Callum respects Desi enough to never put her down when she still wants to workout and eat healthy things, but he also lets his own opinions be known that he loves a full figured woman, but will appreciate her at any size. He never disrespects her and really appreciates her own need to tone up and want to be healthy to feel better about herself. Together they communicate which is the heart of any relationship. Their relationship grows from some of these seemingly basic things, but I love it.

There is a lot of Valentine family, which is my first interaction with them, along with sprinklings of other characters that have or will come along in other books.

I fell in love with his rope skills. I stayed because somehow he took hold of my heart and made it his.

Callum Valentine didn’t mean to eavesdrop. Then again? When a man is calling a woman fat right in front of your table, it’s kind of hard not to intervene. Especially when the town’s most beautiful creature ever is the one being called fat.

Desi just wants to be left alone. After an ugly divorce, she thinks she’s in the clear. Then her ex takes it upon himself to continue to make her life miserable, giving Desi no choice but to take it or leave.

In fact, her bags were nearly all the way packed when Callum poked his nose into the most embarrassing spectacle the town of Kilgore has ever witnessed. The moment he declares her his and off limits, everything changes—and definitely not for the better.

As if things couldn’t get worse than being called a pitiful, fat heifer in front of the hottest man she’s ever seen, Callum has to go and say that she’s his, and they have to play a game that she’s not quite sure she wants to be playing.

But before her eyes, things change. And suddenly the rules of the game aren’t clear. And they’re crossing boundaries neither one of them see coming.

One thought on “Review – Crazy Heifer by Lani Lynn Vale”