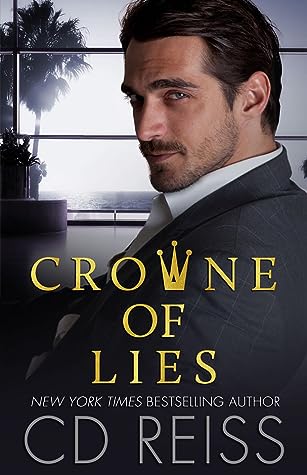 Crowne of Lies; Crowne Family #2
(A standalone within a series)

Wow!! Business in the boardroom and a freak in the sheets…Logan and Ella may have a fake relationship, but their story is full of passion, emotion, and steamy heat.

Logan is the second child in the Crowne family, but he has been running the Crowne empire for quite some time. However, when his father (who still is a major shareholder in the company) lays down an ultimatum that he has to take time off and get married Logan is less than pleased. Logan sets out to find a partner that would work out better in a business deal vs. someone to love in a marriage so he can get back to work as soon as possible and not be tied to someone with all the messy emotional entanglements that relationships require.
When Logan finds Ella, a woman looking to turn around her father’s company she is the perfect fit. She too needs someone to help her out of the hole she’s in and isn’t looking for an emotional attachment either.
Their plan seems perfect, their goals both seem in line, however neither one expected to feel the chemistry explode between them which only makes the months they will spend together a form of torture or exquisite bliss. It just depends on how they look at the risk they are willing to take and if they can keep themselves from getting attached.

Perhaps as a second child myself, I really understood Logan’s sense of proving himself, his need for perfection, and his overwhelming desire to outshine his older brother. I know from asking my own older brother if he knew of the competition we had going on sometimes and he honestly never knew I was trying to win at a game that he never knew we were playing. Logan gives examples of trying to best his older brother and that connection was very palpable.

Then we have Ella, for all appearances, she is the opposite of Logan. An artist, a rebel, a rule breaker. However, we find out that she may be more like him and also that underneath the stiff, uppercrust Logan, he might also be a little like her and that combination is what makes them an explosive couple. That passion also might be what kills their relationship, but you need to read the story to find out what happens.

Interconnected with Iron Crowne, but you can jump into Crowne of Lies if this is your first taste in this world. Although I’d highly recommend reading Byron’s story just so you understand some of the structure of the Crowne world and perhaps some of the barbs the family tosses out at each other, but it isn’t necessary to enjoy Logan’s story.

Twelve months living in his house, holding his hand, wearing his ring on her finger, and in exchange, she’ll get her father’s company in the divorce settlement.

They have one year to convince his skeptical parents that they’re happily in love, and he’s settled enough to run Crowne Industries.

Ella wants the company badly enough to live with a man who will never love her. She’’ll sleep in his room and kiss him for show.

Her heart may melt whenever he’s around, and his touch may ignite a fire inside her, but she’s convinced surrender will break her heart.

She’s sure she can last a year without giving him her body. 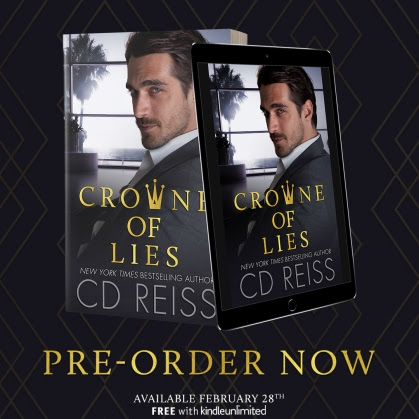 Be notified FIRST when Crowne of Lies is live: http://bit.ly/2NVIehg

2 thoughts on “Review – Crowne of Lies by CD Reiss”