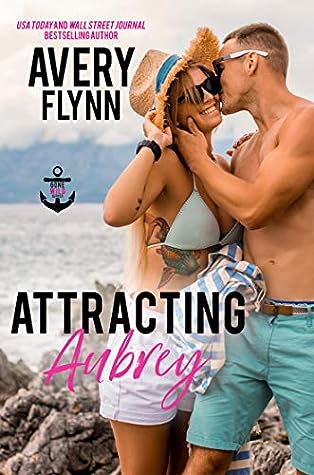 Attracting Aubrey; Gone Wild #3
(A standalone within a series)

Avery Flynn delivers comedy, steam, and romance this time while sailing upon the ocean waves.

Aubrey Dean has set sail for a week long singles cruise with her best friends. Aubrey is known for her crazy antics among her friends, but it has been awhile since she has pulled off one of her pranks since moving to a small town where everyone knows everything that happens. It might be this very reason why she began her Insta account to follow her celebrity crush on Carter Hayes, an escape from her small town life where she can ogle, imagine, and dip into fantasy. However, the moment she leaves small town life behind, she jumps back into her old skin and has no trouble pranking her friends. The only pause in her plan is her hot neighbor who also happens to look a lot like Carter Hayes.

Carter Hayes booked himself for a cruise incognito to help him win a new role in an upcoming independent film. He wants to break out of the roles he’s been currently doing and the only way to do that is to prove to the director that he can blend in and lose his superhero identity. Hence, he is now a dental hygienist from Iowa. Upon first arriving on the ship he gets pulled into a pants stealing prank by his ship neighbor, Aubrey, and things only escalate from there. The even weirder thing is, he actually enjoys himself for the first time in a long time and he doesn’t want to leave Aubrey’s side.

I never dreamed I’d meet my celebrity crush while stealing every single pair of my best friend’s pants.

Trust me, my life is not that wild. In fact, the most excitement I usually get is running my fan-favorite Insta thirst account featuring butt-tastic pics of Hollywood superhero Carter Hayes. So, imagine my shock when, in the middle of the cruise ship hallway, I realize the guy whose shirt I’m stuffing slacks inside of is Carter disguised as a tourist. How I manage not to faint dead away, I’ve got no clue.

When word leaks that Carter might be on board, he asks me to help him maintain his cover. There’s no way I’m gonna say no to that. I just don’t share that I’m the anonymous woman behind the fan account that reported sighting him onboard. No biggie. Right?

However, when things between us go from friendly to hot to OMG-I-can’t-keep-my-clothes-on-around-him, all I can do is hope he never discovers my secret. You see, somewhere along the way, Carter went from an untouchable movie star to the man I’m falling for.

Five friends. One singles cruise. So many sexy shenanigans.

Be sure to check out all of the books in the Gone Wild series:
#1 Kissing Kendall by Katee Robert
#2 Gaming Grace by Piper J. Drake
#3 Attracting Aubry by Avery Flynn
#4 Beguiling Benjamin by Robin Covington
#5 Loving Liv by Stacey Kennedy