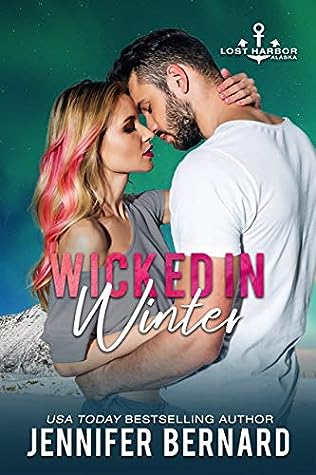 Wicked In Winter; Lost Harbor, Alaska #4
(A standalone within a series)

Wicked In Winter is a ton of fun with wicked chemistry that heats up the winter months between Gretel and Zander.

What starts out as a bet between Gretel, the new girl in town, and Zander, the pseudo-father to his brothers, to see if Gretel will stick out her first cold, unforgiving winter in Alaska only gets more heated when their attraction ends in a marriage with an *(asterisk). So, unlike a fake marriage or one only on paper, their marriage is one with lots of chemistry, because they refuse to deny it between the two of them, but one that is also mutually beneficial.

They both have a reason to need a wife/husband in the short term and their attraction to one another is wicked hot, but even with all of their stipulations in place and with them getting along, is it enough for a real future together?

Gretel is used to running free and never staying in one spot, while Zander is used to rules and running his home like the military. The more time these two spend together they more they take on one another’s attributes and really getting along. Gretel is bubbly and attracts people to her side like a beacon of light and her unstructured upbringing secretly craves the way Zander runs his life. Zander is also drawn to Gabby’s playful side, something he hasn’t had in a very long time, especially since he took over raising his two brothers.

Gretel is very easy to like, relatable in the way she just wants to find her purpose in life. For the first time ever, Alaska feels like the perfect fit, even with the sub-zero weather. She doesn’t want to leave even though she has an * clause in her marriage, but sometimes things are out of her control.

Zander is a commendable man, coming home from the military after his parents died, to take on the job of raising his younger siblings. As a young, single male that job isn’t easy, but that fact that he’s hanging in there to give them the best life he can is a huge heart melter. As he begins to fall for Gretel it may be too late to tell her when he finally realizes it, but how to you contain a free spirit?

Fall in love with this frozen land while warming up with this amazing couple in Lost Harbor.

Everyone needs a fresh start sometime. For Gretel Morrison, that time is now, and the place is tiny, snowbound Lost Harbor, Alaska. It’s about time she learned how to rely on herself instead of her wealthy, controlling family. If she can survive the winter here, she can survive anything—although maybe not the lethally sexy and attractive next-door neighbor, Zander Ross.

Zander has his hands full raising his two younger brothers. The last thing he needs is distraction in the form of a spoiled rich girl who has no idea what she’s in for. He’d bet anything she won’t make it past the next blizzard—although he might not either, not with his sanity intact. With her dazzling smile and lighthearted style, she’s everything he’s not. And everything he longs for.

When a threat to the Ross family surfaces, Zander gets the shock of his life when Gretel steps up with an outrageous idea that might help them both. Can he trust her enough to take a chance? Or will Gretel’s mega-millionaire father find a way to ruin their amazing-but-fragile new bond?

Alaska winters are always wild, but this one is about to get wicked.

One thought on “Review – Wicked In Winter by Jennifer Bernard”