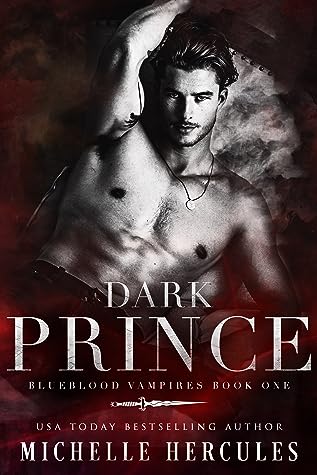 Dark Prince; Blueblood Vampires #1
(A standalone within a series)

Vampires, witches, and dragons, oh my!! All of these supernatural creatures living in Salam mixed with the bully troupe is a great concept! If you love paranormal the world, Michelle Hercules created a story that you want to visit.

Lucca Della Morte has been asleep for 95 years (each sleep lasting longer and longer), cursed by Nightingales centuries ago. A death like coma that he must endure to regain his strength, but will eventually keep him in statis the next time it occurs. The only way to break the curse is to drink from a Nightingale once again, the only problem is that they have vanished or just ceased to exist long ago.  His immortal future doesn’t exactly look great.

Vivienne isn’t a fan of supernatural beings, having almost been raped by a vampire when she was younger. However, when her brother needs her help, once again, she takes on the task of of getting closer to a monster that terrifies her in exchange for her brother’s life.

Vivi is sent to Bloodstone with a spell to mask her human nature with the task to steal a necklace from around Lucca’s neck. No small task to just walk up to a vampire and remove a precious heirloom. The hard parts; don’t become a vampire snack, don’t die, and don’t fall for Lucca.

Lucca is called the Dark Prince for a few reasons, it’s not just a title. When he catches on to Vivi’s duplicity he plans to make her pay, slowly, but he never planned to fall into the game neither knew they were a part of.

What begins as a bully romance turns into something more, it’s awesome how Michelle brings so many paranormal worlds together.  This is a great start to a new series, especially if you love all things paranormal!

He’s the predator in the night.
Cold. Ruthless. Hungry.
She’s the prey that can’t stay away.

There are only two ways a human can cross the gates of Bloodstone Institute: as a familiar to one of the Blueblood vampires who attend the elite school or as a snack.

I’m neither, but I have to get in at all costs. My brother made a big mistake, and now I have to fix it by stealing from the most powerful and cruel vampire to ever come to Bloodstone, Lucca Della Morte. If that wasn’t almost suicidal, I need to get it done before the spell concealing my human nature wears off.

But I forget that I’m only pretending to be a vampire. I’m still human and susceptible to Lucca’s dangerous allure. His darkness calls to my soul. His savagery makes my blood sing. I’m falling for the dark prince, craving him in a visceral way that’s frightening and exciting at the same time.

If he discovers my secret, he’ll destroy me. And yet, I can’t help wanting to get closer. I never thought I had a death wish until I met him.

"I'll never be owned by a man, much less my enemy."
🔥🔥TEASER BLAST🔥🔥
"You and me...we could've had everything."
Cover Reveal!! The Teacher of Nothing by @authorkwebster is coming October 18th!