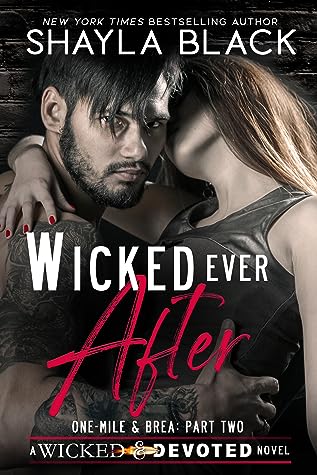 Wicked Ever After; One-Mile and Brea, Part Two
(Part Two of a duet; Wicked and Devoted #2)

With high flying emotions and steamy passion, the second half of this duet delivers a wicked ride.

We pick up right where book one left off. Pierce “One-Mile” Walker just confessed a life changing event leaving Brea Bell in turmoil where she only moments before had been living on a cloud of happiness. With no time to talk or even time to come to grips with her feelings she is left in confusion for a man that has stolen her heart and no one to really talk to.

Their so-called relationship up to this point has been in secret. Her best friend, Cutter Bryant, severely dislikes Pierce and her father has never met the man, but would most likely disapprove of how they have been sneaking around given he is a pastor. On top of her confusion Brea is hit with a bombshell while Pierce is away, she discovers she is pregnant, a sin in the eyes of God. She Struggles with her feelings of disappointing her father, her best friend, the small town she resides in, and lastly is Pierce going to be man she needs in the face of everything. All of these things matter greatly to Brea and coming to a solution that doesn’t throw her world into a tailspin, seems almost impossible.

While Pierce is away he comes face to face with the drug lord who held him hostage and beat him within an inch of his life on his last mission. Knowing the drug lord will go after everything One-Mile holds dear, and since he has no family, the only thing close is Brea, he does the only thing he can do, once he returns he sets her free. He hates keeping her at arms length, but it’s for her own protection. However, when Brea announces to the world that she’s marrying Cutter Bryant One-Mile decides he’s done waiting for the drug lord to come to him, he’s taking out the man himself. On one, and he means no one, takes what’s his especially Cutter Bryant.

Wicked Ever After is a roller coaster ride. I loved watching Brea mature with those around her, growing in her self-esteem and strength. It’s very empowering to witness. I also enjoyed how One-Mile softened not only for her, but those around her. They both became their best selves because they had each other. This is what makes a story worth reading.

He’s dangerous. She’s his—even if he scares her. But once he unravels her secrets, he’ll do whatever it takes to claim her for good.

Add Wicked Ever After to Goodreads: http://bit.ly/39SVVWH

2 thoughts on “Review – Wicked Ever After (One-Mile and Brea, part two) by Shayla Black”