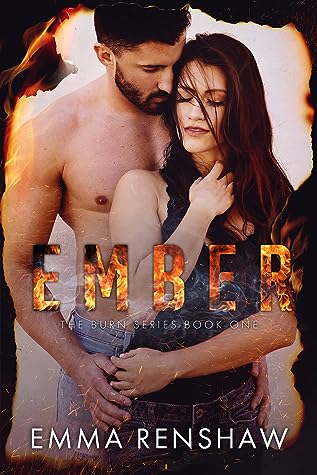 Ember; The Burn Series #1
(A standalone within a series)

There are so many feels wrapped up in this book that is so well written. Ember is a story that will make you believe in fate and that happy endings are possible for everyone.

First of all, the title is brilliant. Ember is not only a title, but it is also a theme that carries throughout the story.

The story begins ten years in the past when Gunner was eighteen and tragedy strikes. A bonfire accident kills and hurts several people, including Gunner and his best friend, changing the course of the so many lives that fateful night. Gunner doesn’t step back into his hometown for over a decade due to this accident, but he does go on to fulfill his and his best friends dream of playing MLB, but at what cost? Losing friends, harding ever seeing his mother, living with regret, feelings of loss. When he returns home Gunner knows he has a lot to make up for, what he didn’t expect was to feel a burning attraction for a single mother, Delilah and her son, Tucker. He has a lot on his plate, moving back to focus on his mother’s health, trading to a new team, making amends. Does he have time for a relationship?

Delilah isn’t Tucker’s biological mother, but she has raised him from day one, the unfortunate part, she hasn’t made it legal. Her cousin abandoned Tucker after birth and Delilah has been raising Tucker since. Delilah has been there for every bruise, scrap, late night sickness, etc… Tucker doesn’t know any difference and except for the nine months he was carried, Delilah is his mother. Unfortunately, her cousin says she now wants him back. This is all takes place when Gunner comes to town and guess who Tucker’s favorite baseball player is? Gunner. Luckily, Tucker has a distraction while Delilah can deal with her cousin, but who will distract her while the ember of lust burns within her over the hot baseball player?

Their attraction is instant, but their relationship is slow burning and grows organically. Gunner isn’t in town looking for love and Delilah isn’t looking for someone to jump in and out of their lives given her situation. Both of them know the stakes of the game and don’t want to incinerate in them. Their passion boils slowly, but it almost seems inevitable that it will ignite no matter what they do.

Ember is beautiful how it grapels with pain, loss, grief, and love.

I never planned to return. Not to the regrets. The bitter memories. The guilt.

My baseball career gave me both the excuse and the money I needed to start over. Then my mom called, and I found myself headed back to the one place I swore I wouldn’t step foot again.

Meeting Delilah wasn’t part of the plan. Falling in love with her adorable son was even less so. And yet, what’s brewing between us is too intense to be denied. The unexpected passion is almost enough to distract us from the crumbling of both our worlds.

But even as the sparks fly, someone is waiting in the shadows to burn it all down.