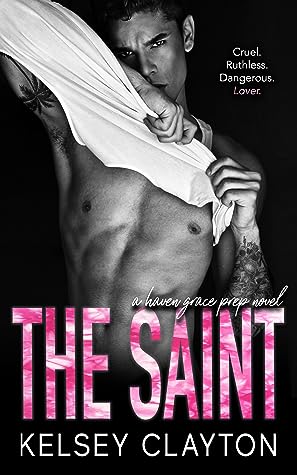 The Saint; Haven Grace Prep #2
(A standalone within a series)

A tangle of angsty emotions, that once I started The Saint I was unable to put it down!!

Knox Vaughn isn’t anywhere close to being Prince Charming. Drinking, smoking, cursing, skipping school, he is the embodiment of what bad boy means. Having a misdemeanor record a mile long should make a girl like Delaney run far away, but something about the boy behind the bad boy mask calls to her. There is more to him than people give him credit for and that Knox is what keeps pulling Delaney back again and again.

Knox knows Laney is trouble – pure, sweet trouble – unlike the normal trouble he’s used to, but he’s so intrigued and instantly possessive of her that he couldn’t stop himself if he tried. He honestly has no idea what he’s doing, he’s never been series with anyone – ever –  and Delaney has him tied up in knots. Her perfect good-girl world is beyond what he knows, except that he should give her up, but he knows he can’t he’s not that good.

When danger lands at his doorstep he does everything to keep it away from touching those in his life, but in the end he might just have to give up the one good thing he’s ever had, even if it kills him.

The Saint is a gripping story about two souls more alike than you could imagine, but about from two entirely different worlds which makes their story seem impossible to achieve. It’s amazing!

Knox Vaughn is the epitome of a bad boy.
He’s trouble in a sexy-as-sin package.
I know it.
They know it.
Even he knows it.

But, it’s like a moth to the flame.
I can’t stay away—even though I’m going to get burned.
You know what they say,
The sinners are much more fun.
And this saint is changing the game.

She’s an angel,
But with me, she’s playing with the devil.
I’m the last thing a woman like her needs.
And yet, I can’t keep my hands—and mouth off of her.
We’re from two different worlds,
Worlds that can’t possibly work.
I’d do anything for her,
But I can’t be the SAINT she deserves.

1 thought on “Review – The Saint by Kelsey Clayton”