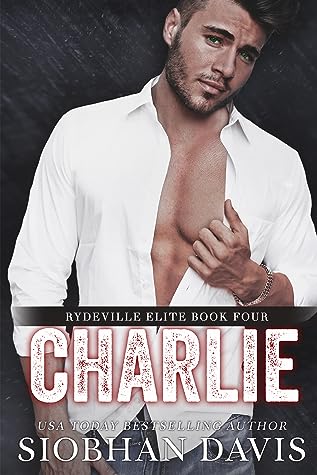 Charlie; Rydeville Elite #4
(A standalone within a series)

Charlie first appeared in Bully Me: Class of 2020, which contained a collection of novellas and prequels that would later be expanded upon. This is now the longer version of that original novella that contains more Rydeville. Savoring this longer story in a sort of reread gave me time to really dive into the Rydeville world and enjoy it even more.

Within the Rydeville series, Charlie held a pivotal role in the overall arc of Abby and Kai, but now the dust has settled and he is just trying to pick up his shattered life and living with the remorse he initially played.

Demi shockingly looks a lot like Abby, the girl Charlie had a crush on and the woman he thought he was married to, until things went to heck. Demi is also his assistant at the company where he has become the president since his father’s death, also one more thing he feels remorse for. Charlie is basically a mess, but he also can’t stop thinking about Demi, hence why he treats her like crap. If his life is a mess he doesn’t want anyone around him to feel good either.

Demi is only working at Charlie’s company because her father is very sick and it is the same company where he worked before he was let go after he suffered a stroke. She needs the job to afford his medical bills even though she is tormented every day by Charlie.

This story will gut you if you are a fan and have you looking forward to the next book in the series with anticipation.

Demi
Dropping out of college senior year was never part of my plan. But Dad needs me, and I’d move mountains for the only parent I’ve ever known—even working for the company that fired him.

My boss, Charlie, is determined to make my life a living hell, availing of every opportunity to undermine my confidence, to humiliate and threaten me.

Sleeping with him the night of his wedding might have something to do with his attitude.

Or the fact I’m the spitting image of the woman he really wants.

If our financial situation wasn’t so dire, I’d tell Charlie to stick his job up his delectable butt.

But I’m trapped, and things are only getting worse. Because the more layers I uncover, the more I realize he is nothing l expected and everything I crave.

Charlie
If there was a manual for all the ways a person could mess up his life, it’d have my name written on it.

I can’t undo the things I’ve done, no matter how badly I want to, and every day is a constant reminder of my epic failure.

It’s as if Demi has been put on this earth to punish me. To inflict more torture and pain. Because every second I’m around her, she makes me feel things I don’t want to feel.

So, I lash out. Doing my best to push her away.

Until I realize she’s everything I never knew I needed, and the fight becomes a new battle—one to win her heart.

Releasing in the Bully Me: Class of 2020 anthology on March 24, 2020. Thereafter, it will be released as a separate title in the Rydeville Elite series on May 4, 2020. 60k word short novel with no cliffy and a HEA.