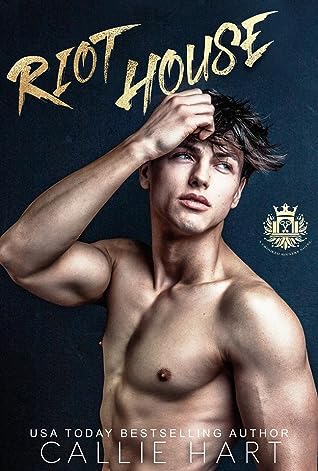 I read a preview of the Riot House in the Bully Me anthology last month and I’ve been looking forward to returning to this world since then. I can’t remember reading something so poetically lovely wrapped around such a tragic story in a very long time. Callie Hart’s words are top shelf level gorgeous, her descriptions are eloquent, even when you are reading about dark topics I am so taken in and wrapped up in the beautiful writing that I could read her words forever.

Wren Jacobi is a dark, poetically tragic soul. He comes across as an enigma, with just enough damage without being completely broken. He believes his heart is blackened, under lock and key and shut up tight, but he is also artistic (expressing his emotions through other means), he’s also intelligent, and strategic with every life move he makes. A gorgeous specimen of a man who can battle with big words, sharp logic, while digging into your psyche to tear apart your soul. As much as he prepared for Elonie Stillwater’s arrival he never took into account her own will and determination. I loved reading his character shape and reshape as the story progressed.

Elonie was raised under her militant father and bears many scars of her own. While many students would hate to be away from their families at boarding school she isn’t one of them. However, when she arrives, meets Wren and his initial threat to watch her back is layed down she isn’t scared since she has faced worse than pretty boy Wren Jacobi. Even with his continued scrutiny, his friends snide remarks, and just overall unsettling feeling she enjoys being away from her militant father, anything is better than that. She is also somewhat of a mystery. She has many layers that slowly are revealed as the story progresses and she is a powerful woman to be revered.

Wren is fascinated by Elonie. Her gumption to never give in intrigues him, she may not be the lamb he thought she was initially. Elonie finds herself pulled to Wren even when her instincts tell her she shouldn’t. Who is the lamb and who is the wolf? Come to Riot House and find out.

They might be richer than gods, but they’re morally bankrupt.
As far as the boys who run America’s most exclusive international academy are concerned, I’m an unwelcome interloper, an inconvenience, and they’re determined to make my life a living hell.

When Wren Jacobi sets eyes on Wolf Hall Academy’s newest inductee, all he sees is an easy mark. A reserved little girl with a target painted on her back. He knows nothing of my troubled past, though. Nothing of my mother’s suspicious death, or the horrific treatment I’ve had to endure at the hands of my psychotic father.

And he has no idea of the lengths that I, unassuming little Elodie Stillwater, will go to in order to break the savage beast who dreams of breaking me first.

There’s a wolf stalking the forests that surround my new school.
Little does he know…
There are far scarier predators lurking out there in the dark.