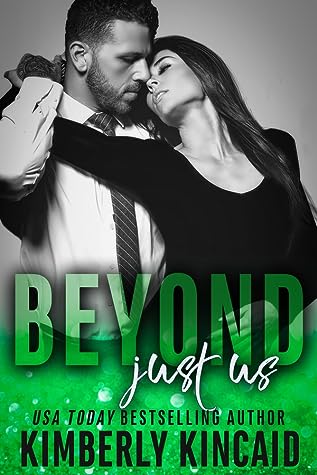 Beyond Just Us; Remington Medical #4
(A standalone within a series)

Like reading an episode of Grey’s Anatomy, Beyond Just Us is full of McDreamy men, smart women, and sexy drama.

Whether you’ve followed along with the Remington Medical series or not, you’ll love this book and have no trouble jumping into Declan and Tess’ story.

Declan Riley has been mentioned in past books, he’s a friend of Connor’s (who works at Remington and is also a very good friend of Tess’s). What we knew about Declan is that he’s been in the Air Force with Conner, but he’s now a cover model and he dons several romance covers that Conner loves to gift the ladies at Remington which he has no shame in telling Declan whenever they talk. That was the extent in which we knew his background….oh, except he’s also Irish…so the accent…hard swoon, sign me up for Declan please!!

We finally get Declan as he appears in Tess’ ER with no hope, no family, and a death sentence hanging over his head. (So not fair that Mr. McDreamy is finally here and he’s broken…but what a story).

Tess Michaelson has had a bumpy road through the Medical series and I’m really happy she is finally getting a good man. She has been a rock for all of her friends, coming through in their times of crisis. It helps being an ER doctor she knows what has to be done and how to accomplish it fast. Unfortunately, in her personal life she’s a new mom and a recent divorcée so she doesn’t look at love the same as her friends around her who are all happy and coupled up, she doesn’t believe it will ever happen for her again and she’s fine with that.

When Declan needs help and she has the power to save him she does the one thing that she feels she would do for anyone in his place (it doesn’t hurt that she’s fantasized about him while reading one of the books he’s been on the cover of), she offers herself up as “tribute”, or more like his wife, since she has great health insurance which will help get him in a medical trial and could hopefully save his life.

While neither Declan or Tess expect to fall in love, neither go out of their way to fight their attraction to the other. They both know what’s at stake and are both just truly caring people who want what’s best for the other. It’s really hard not to care for someone when they are genuinely a decent, good person.

This is a beautiful story about two caring people who really do need each other, but don’t really know how much they needed the right person in their lives until they were there. This might be one of my favorite books in the whole series.

Remington’s most cynical doctor is about to get upended by two little words:
I DO.

1 thought on “Review – Beyond Just Us by Kimberly Kincaid”