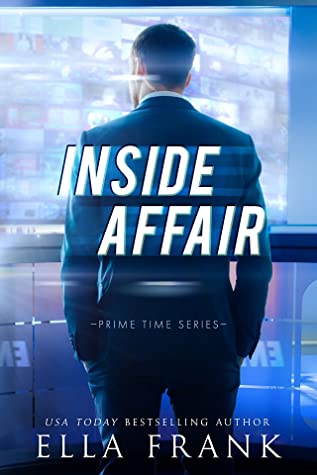 Breaking News!! Ella Frank has done it again! Inside Affair is a page turning read with the perfect amount of chemistry, angst, suspense, and snark.

I love the snarky humor that Ella injects into her characters and Inside Affair has the perfect amount that balances out the angsty emotions between Sean and Xander. This is not a typical story between two men; Sean and Xander have known each other most of their lives and while Xander is an out gay man, Sean is straight. Neither have ever had any feelings towards the other or really given the other much thought, so the chemistry that bubbles up between the both of them is something new and foreign and completely organic. Their attraction, which they both ignore and try to fight, grows between them as Sean works on catching Xander’s stalker.

Xander is a news anchor with a stalker who has taken things to a dangerous level. He now needs a bodyguard, which isn’t something he is looking forward to so he asks his lifelong friend for help, and Sean Bailey is the answer. Since they actually want to catch the stalker the plan is for Sean to pose as his fake boyfriend, not something Sean hasn’t done before in his undercover work as a detective, but Xander isn’t sure the feelings that begin to arise are necessarily fake and he isn’t sure how to handle that.

This is the first book in the Prime Time series that does end on a cliffhanger. Sean and Xander’s story will pick up in book two and I’m really excited to see where their relationship goes.

Xander
If I had to describe Sean Bailey, it would be: a surly, temperamental pain in my ass. Never in that equation would I ever include the word boyfriend—and not just because he’s straight.

The older brother of my life-long best friend, Sean is a detective for the Chicago PD, and is also known as Detective “Dick” for being…well, a surly, temperamental pain in everyone’s ass. He also happens to be the best they have, which is why I find myself on his doorstep the night my life is threatened by an anonymous stalker.

I only wanted the name of a bodyguard; I didn’t expect for Sean to volunteer for the job. Now, not only do I have a bodyguard, I also have a fake boyfriend.

Sean
It must be so hard to be Alexander Thorne, the number one prime-time news anchor in the country, with millions of dollars and a car that costs more than my house. I mean, I’m allowed to give him a hard time about it, but when some creep decides to cross the line and go after him, they’re gonna have to answer to me.

Going undercover has never been an issue in the past, so I don’t see why there’d be a problem now. Xander and I have known each other for years, so this should be a breeze. Except suddenly my stomach’s flipping when he looks my way, and my body comes alive whenever he brushes by me. I know I’m good at my job and playing a character and all, but this is getting out of hand.

I can’t be sure that either of us are playing anymore.

1 thought on “Review – Inside Affair by Ella Frank”