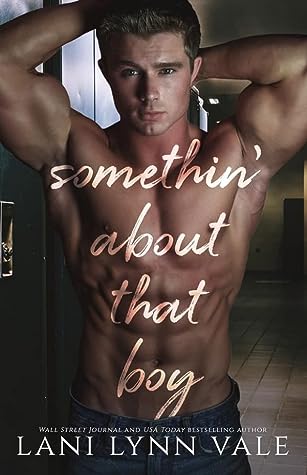 Somethin’ About That Boy
(An interconnecting standalone within a series)

Sigh…Sigh…Sigh…I’m in love with this high school romance. Vale’s books are always excellent and this story is no different. Somethin’ About That Boy is completely centered around high school students and interconnected within Vale’s previous series, but is a complete standalone.

Banner Spurlock is most recently related to Ford (you may remember him from Maybe Swearing Will Help), but while there are several interconnections to Vale’s past works sprinkled throughout this can be read as a complete standalone if this is your first time reading any of her books so don’t feel intimidated to jump in and enjoy.

My absolute favorite moments are when Banner and Perry are together in her room and it’s just the two of them connecting on a deeper level, falling in love…I was mush…pure mush. Both of them know deep down they have deep feelings and although it’s quick, they can’t deny how they feel. It’s sweet and I was smitten, yes, I admit I was full of smit!

Somethin’ About That Boy is the perfect blend of connecting characters of the past, especially for avid Vale readers, but for this new book, this younger world, it was also an introduction to new players and establishing a place for a new series. I’m really excited to jump into Kilgore with this new gang.

Banner is relocated to Kilgore his senior year of high school due to a bullying situation back in his hometown. On his first day of school Perry catches his eye and while she keeps her head down during the school day she lights up the volleyball court when she plays.

The only thing that could possibly mess up the connection Banner and Perry are building is when Banner’s bully follows him to Kilgore. It may involve more than just breaking their hearts, this time his bully could go too far.

Banner Spurlock knew the moment that he walked into Kilgore High School and saw Perry Street that life was about to get interesting.

Forced to move due to a problem at home, a problem in the form of his ex-best friend hating him for something that Banner’s father did, Banner doesn’t think very much could improve in his life.

He left his status as king of Benton High School behind and moved to a new school where not only would he have to try out for a new football team and prove himself, but he’d also have to find a place for himself in the hierarchy.

Only, the moment that he arrives, he knows that finding a place for himself won’t be too hard. Especially when his reputation follows him all the way to Kilgore, Texas.

Perry Street hates school. She hates her peers—most of them anyway—and she hates her classes. All she wants to do is finish her senior year, graduate, and find a place that will give her a full scholarship so that she doesn’t have to be stuck here forever.

Then she walks into first period, on her first day of her senior year, and sits down. Seconds later, he walks in and changes every single plan she’s ever made.

The boy brings trouble with him that nearly kills her.