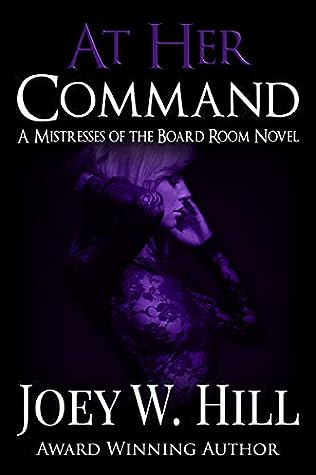 At Her Command; Mistresses of the Board Room #1
(A standalone within a series)

You see in this world, perhaps just like a rainbow, it isn’t just black and white. There is an array of how people find their pleasure and pain (and most times those two are intermixed), but I enjoyed reading about this rare man who was a sub, in complete service to his Mistress even when not in play, and yet was also a SEAL, a man with full alpha tendencies committed to service and protect by nature, but one not typically at the ready to kneel. At least that he was aware of until he met Rosalinda.

Rosalinda has had her life threatened and although she doesn’t believe she needs extra protection her friends bed to differ. Upon meeting Lawrence she is impressed with his security measures, but even more so with his subservient vibes. He has never been immersed in the lifestyle and she is itching to teach him everything she knows. Lawrence is someone she gets to personally unlock and truly find out his potential, it makes having someone around to guard her less unappealing.

While Lawrence works at neutralizing the threat surrounding Rosalinda he also struggles with natural submissive tendencies that she brings out in him. He feels the need to protect her, but also to submit. It messes with his mental state the longer he’s around her. How can he be the best choice when he’s pulled in two different directions?

Ros knows in polite society a man is supposed to be the alpha dog and as much as she disagrees with that view she also sees Lawrence struggling with his place in the world. As much as she wants to guide him along his journey, he also has to be willing to take the steps to meet her along the way. A D/s relationship is only as good as the trust they build upon it.

This is the first in the Mistresses series and you are introduced to the Domme’s that will have their own books in the future as well touching base with past Dom’s from Hill’s other series.

Getting a man on his knees isn’t a problem. To Rosalinda Thomas, it’s an opportunity…

Ros doesn’t accept excuses for falling short. Particularly not from herself. As CEO of a successful New Orleans marketing firm, she knows how to bring quality to the top. The same way she knows how to get it from the men who serve her in the bedroom.

Lawrence has been a SEAL since his teens. He doesn’t know how to be a civilian. So when being a SEAL is no longer an option for him, he accepts a security job at Thomas Rose Associates to keep his edge. But from the moment he sees Rosalinda, his deep need to serve gets redefined.
He’s never belonged to a Mistress. Ros is about to change that.