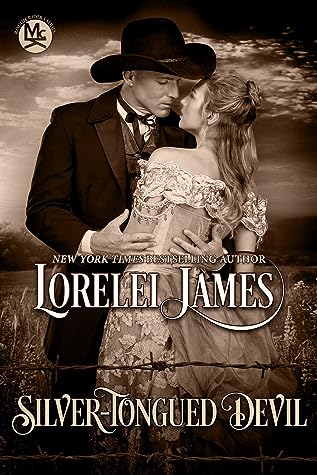 Whether you are a Lorelei James fan, a historical romance fan, a fan of just a well written story, or looking for a new series because this is the where it all begins. Silver-Tongued Devil is the origins of the McKay Rough Riders series and although it may be the last book written it is the beginning of where the families McKay and West began.

I began reading Lorelei James years ago and was instantly hooked. The Rough Rider series became one of my instant buy everything Lorelei ever wrote and also forever has been a one-click author, so of course to have the origins of where this family came from is a feeling of pure giddiness that is basically indescribable.

It does not matter what time Lorelei writes the McKay family in; the 1800’s, the 1900’s, or even the 3000’s (yes, I’d love to see one of my favorite families living in the future) the point is the McKay’s are timeless, Lorelei’s writing is flawless, and I can truly never get enough.

Silver-Tongued Devil takes us back to the wild west. Back to a time when towns were just forming, there was such a thing as courting, and you worked hard for every little thing you had. Silas and Jonas McKay are twin boys who lost their parents young, but moved from the east towards the west and learned different skills along the way. This helped them survive once they finally settled on the spot that would become the McKay homestead. For Silas his dream of owning a ranch and the land needed to maintain the cattle actually coming to fruition. While Jonas was a deputy, which wasn’t necessarily his dream or his long term goal, but for now he was happy looking after his trouble making brother.

Dinah Thompson came out west looking to start over once she lost her parents. As a school teacher and nurse helping out the local doc she was content with her arrangement until Silas began courting her. Dreams of marriage and what could be made her wish time would move faster and also slow down all at once. She loved getting to know Silas’s land, setting up his home and especially getting to know him. If only he’d stay away from trouble everything would be perfect.

While Jonas is also in love with a particular woman, his love is a bit tricker to profess in polite society.  I’ll leave as a statement for you to ponder and discover for yourself when you pick up the book.

The McKay’s and the West’s have been feuding it feels like forever. You hear about it in multiple Rough Rider novels and you get to the bottom of where the animosity stems from here. A lot of questions are answered and just like Lorelei is known for, she doesn’t leave anything unturned. This is a gorgeous book that is not only rich and full of a time long gone, but also full of feisty McKay history. I could read her books forever and I know you will love this one!

Their love story sparked a brushfire that grew into the legacy of Lorelei James’s Rough Riders series. This standalone historical romance is a prequel to the McKay family saga.

The West doesn’t get much wilder than Silas McKay. He’s earned his cowboy reputation not just as a rancher, but as a brawling card sharp who’s short on cash but long on charm. And just as soon as he claps eyes on the pretty new schoolteacher? Well, Dinah Thompson is about to discover what courtin’s like McKay-style—sweet, hot and passionate.

Luckily, Dinah’s got the sass and sense to stand up to Silas’s shenanigans. She relocated to rural Wyoming to teach and become a self-reliant woman, not to spend her nights dreaming about that blue-eyed rogue and his ranchwork honed-body. But Silas McKay’s powerful appeal and tempting promises convince Dinah to recklessly go all in with him.

When Silas’s long-standing rivalry with Zeke West puts Dinah, Silas and his twin brother Jonas in danger, each one is forced to make difficult decisions about taking a chance to build their legacy . . . and a love that transcends time.