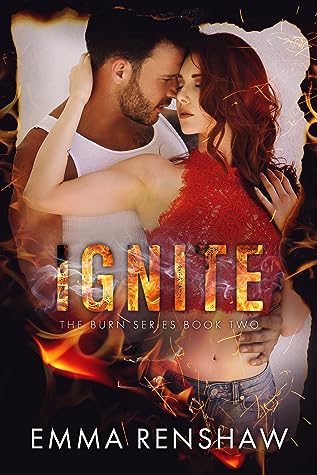 Ignite; Burn #2
(A standalone within a series)

Two lonely souls from broken homes ignite the pages of this beautiful book that will touch your heart.

A town fire changed the lives of many people forever in Hawk Valley, but in Ignite we are focused on Zoe Boswell, a girl who feels responsible for multiple deaths that followed when a towering bonfire crashed to the ground after she threw in a family portrait and a young firefighter, Ridge, who was there that fateful night and pulled his very first rescue from the wreckage, a beautiful girl named Zoe.

It could be destiny that these two met during harrowing circumstances, or was it chance? Ridge’s very first call as a firefighter and a moment Zoe wishes she could take back that will haunt her for the rest of her life. Unfortunately, because of this guilt once Zoe is released from the hospital she leaves Hawk Valley and doesn’t return. Not for many years at least.

Eleven years later, at the final request of Zoe’s aunt, Zoe finds herself crossing the city border of Hawk Valley once again, something that she never thought she’d ever do again. She was only planning to be in town long enough to spread her aunt’s ashes, but the longer she’s there she finds herself staying a week, and then a month and it has a lot to do with one sexy firefighter.

Ridge thought a lot about Zoe over the years, but he didn’t expect to see her again. When she comes back to town he is instantly drawn to Zoe. The more time he spends with her, even though he knows she’s only in town for a brief time, he knows he is willing to do anything to keep her to stay.

The longer Zoe is in town, accidents begin to happen and those accidents all connect back to her. As much as Zoe would like to stay, everyone around her is in danger, something she’s always known since the night of the fire. Deep down she knew she wasn’t staying, but the time has come and saying goodbye is one of the hardest things she’s ever done.

Both Ridge and Zoe didn’t have the best cookie cutter parental upbringings and yet they both found their own family to surround themselves with and became better people in spite of their biological connections. I always love this message when I’m reading and it’s a warm hearted message to remember.

One girl changed my entire life.

After she left without saying goodbye, I never expected to see her again.
The fire that changed Hawk Valley was my first night on the job. She was my first save as a firefighter. But she wasn’t the first to walk out of my life without looking back.

I grew used to putting out sparks in my personal life, too. But when she came back, I couldn’t stop myself from chasing after her. Just a fling, we said. But where there’s smoke, there’s fire.

Of all people, I should have known that. It could never be casual with us. It was always going to become an inferno.

Until someone else put out the fire.

A portion of Emma Renshaw’s first week proceeds will be donated to the ALS Association in honor of George Gallegos, Emma’s uncle who died of ALS in February of 2019.