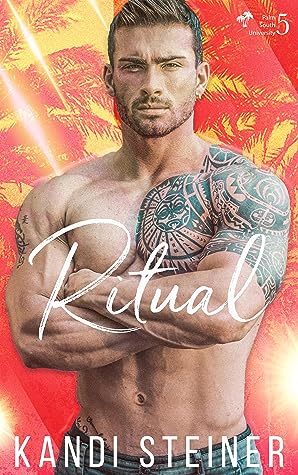 Bring on the college drama, I am completely hooked on PSU!! This is one series, like a favorite TV show that returns season after season, I cannot get enough of.

A new year at PSU, for some of the students this is their last semester, or last year. For all of them they may be another year older, perhaps a touch wiser, but they are still filled with lots of our favorite drama. Ritual is layed out, just like the past four books in six episodes where each character gets a POV focus and all of their stories interweave throughout the entire book. Ritual should not be read as a standalone, only read after the previous four books to have the best understanding.

Jess is entering her final semester of college and finally over her relationship with Jarrett. At the end of last semester she was approached by a freshman, Kade, to be his “teacher”. Jess, also known as J-Love had a well known reputation, one she isn’t ashamed of, so once she decides to put that reputation to good use and really getting Jarrett out of her system for good she says yes. What she didn’t expect was catching feelings for Kade in the process.

Bear, the strong, emotional support guy of the group for everyone really struggles emotionally this book. He crashes hard with everything Erin revealed to him at the end of last semester, his addict mother, his brother that is growing up and making decisions on his own, and more. There are things hitting him at all sides and the big guy isn’t sure how to fix himself. His story is truly heartbreaking. He’s so lost and I just want to give him a hug.

Erin has finally come to grips with her past, her mistakes, and everything that happened to her. She’s getting counseling, going to therapy, and trying to make amends to those she’s wronged. Even with all she’s been through Erin finds herself at a point where she’s open and meets someone at therapy. Gavin makes her feel alive, a feeling she hasn’t felt in a really long time.

Ashlei is finishing up her last semester too and working back at Brandon’s company. However, there is a new intern that gives her a side eye and makes her uncomfortable from the get go. No matter how strong her relationship is with Brandon Ashlei has a bad feeling that something is going to happen to mess it up. So she works hard, keeps her focus on work, but also silently waiting for the other shoe to drop.

After coming in second place at the biggest poker tournament of her life, Skyler is actually happier than ever, that is only because she lost to her boyfriend, Kip. Their relationship is strong, but the only sad part is he is attending school in California while she is still in Florida. They do talk and video chat constantly and of all the couples I feel the best about their lasting relationship.

Cassie and Adam is the couple I continue to feel the most angst over, every single book!! I want to smack them every time. Although isn’t there that couple in every favorite show you watch? They have been official now for over a semester because before that they never could seem to get on the same page. However, this semester an ex makes a reappearance which throws a monkey wrench into their perfect bliss and once again you will shout and scream at this duo.

Kandi Steiner really knocked it out of the park with her return to PSU. I was engrossed from the beginning to the very end. I can hardly wait until the next season, there is still so much I need to know! 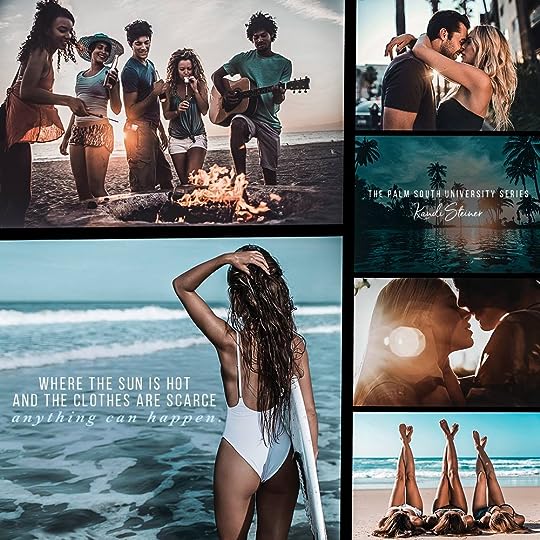 Written like your favorite drama television show, the Palm South University series has been called “a mix of Greek meets Gossip Girl with a dash of Friends.” Follow seven college students as they maneuver unrequited love, teacher/student romance, the tangles of “no strings” relationships, love triangles and more. Each “season” has six “episodes,” and just like when your favorite show hits Netflix, you can read just one episode at a time or binge the entire thing. With the perfect mix of angst, emotional romance, and romantic comedy, the Palm South University series is your next guilty addiction.

The weather isn’t the only thing heating up in South Florida. At a school where fraternities and sororities don’t exactly play by the rules, relationships are bound to be tested. Parties and sex are definitely key ingredients in the Palm South recipe, but what happens when family issues, secret lives, and unrequited love get tossed in the mix?

Follow Cassie, Bear, Jess, Skyler, Erin, Ashlei, and Adam as they tackle college at a small, private beach town university. Written in television drama form, each episode of this serial will pull you deeper and deeper into the world of PSU.

Where the sun is hot and the clothes are scarce, anything can happen.