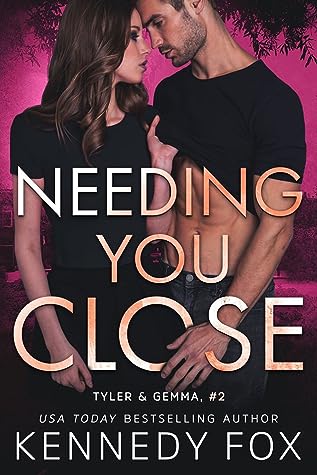 Needing You Close is the second part of a duet, and picks up right where Keeping You Away ended and if you want to get the best experience out of the story you will want to read the first part of he duet first.

Now that that is out of the way….Needing You Close is the continuation of Gemma and Tyler’s story and full of everything you would could possibly hope for. A sweet, slow-burn love story that both of them deserve after waiting for so many years. Yes, there is some angst in still arriving to that point, but considering so much of their story was already filled with it in the first half of their story, I love that this half they ignored the world and lived in a rose colored bubble. A lot of the story was focused on the two of them just falling in love all over again. Don’t underestimate any author when a couple is living in a bubble, at some time it is going to pop, but oh….that bubble was so sweet while it lasted. (I know Brooke and Lyra were manically laughing when they popped that bubble though as all good authors do).

For fans of the other series, where Tyler first made his appearance, you will love catching up with former characters, but it is not necessary to have read them to still enjoy these brief references. You will also get a brief insight into the future characters and what’s on the horizon with the next duets. I’m excited to see where this entire series arc goes.

Back to Tyler and Gemma. They build on their friendship in this second half of the duet, while also looking for more as a potential future, but it is hard while Gemma tries to escape her present and Tyler is still running from his past.

Their timing just never seems right when Robert’s demands become overbearing and Gemma finally wants to call it off, but jumping right into something new with Tyler shouldn’t be right, unless Gemma never really fell out of love with him after all. Can they escape the monster in a rich suit and finally be together or are they both too late? Who will win in the end and what ever happened to Victoria? Don’t worry…all of your questions will be answered and you will love this story. I never expected to see my first love again after he left me twelve years ago. Though I’ve moved on, working with Tyler is no easy task—especially when he focuses his bedroom eyes on me. Flirting with the past is like playing with fire, and considering I’m engaged, I’m bound to get burned.

When the man I promised to marry reveals he’s a wolf in sheep’s clothing, I run to the safety of Tyler’s strong arms. As we grow closer, so do our feelings. Threats and ultimatums are made, and the revelation of the truth is enough to bring me to my knees. I’ll do whatever it takes to protect my family, even if it means shredding my heart.

Too dangerous, too unpredictable, too risky to handle alone—we need each other now more than ever.

After our world nearly collapses, there’s nothing left to do but take it back. Tyler and I team up to destroy the people who are determined to ruin our second chance at a happily ever after. Though our love is undeniable, I just hope it’s enough. We’ll fight until the end to be together—regardless of who tries to get in our way.

NEEDING YOU CLOSE is a slow-burn, angsty romance wrapped up in an intense love story. It’s book 2 in the Tyler & Gemma duet and must be read in order.

Keeping You Away, Gemma and Tyler duet #1

2 thoughts on “Review – Needing You Close by Kennedy Fox”