Ruthless Empire; Royal Elite #6
(A standalone within a series)

Wow, Wow, Wow! Always watch out for the quiet ones! Ruthless Empire is fantastic!

Cunning, full of stealth, and super strategic both Cole Nash and Silver Queens are powerhouses in the mental games they have played over the years. Both Cole and Silver may be masters at manipulating others, but when it comes to the game of the heart it takes more than quiet execution, it requires total domination and neither are ready to lose.

Whether you are familiar with their characters or not you will absolutely love the Royal Elite world told through their eyes. I couldn’t stop turning the pages to find out how the war was going to be won, but honestly they were fighting more than a war they were battling to own the other’s soul.

Both Cole and Silver are excellent players in the games they play. While Cole happens to be just a bit better, the pure stubbornness of Silver makes it so she never gives up which makes her a formidable opponent, something that Cole really admires in her. There are subtle differences between them such as, Cole is truly after her heart from the very beginning, he may not do it in the heart and flowers kind of way, but frankly Silver isn’t exactly a hearts and flowers kind of girl. That doesn’t stop her from believing she wants to be showered with devotion, but deep down she actually likes Cole’s depravity, something she would never admit to him because it’s like admitting defeat. This in turn continues his games which continues her denial which continues their vicious circle. Yeah, their dynamic is sort of screwed up, but it is also intoxicating and makes Ruthless Empire a ramped up, page-turning read. It made my heart race until the very last page and I loved every juicy minute of it.

Cole battles with some of his own personal demons, but I’d say not as much as Silver does. She is hit from a lot of different angles by being the daughter of a man who potentially could be the next Prime Minister and on top of it her mother isn’t exactly the most emotionally stable person in her life. The pressure to always be perfect sits heavy on her shoulders every single day. Then when her father marries Cole’s mother, the hidden feelings Silver is harboring for him are even more forbidden now that he’s her stepbrother. Living in the spotlight has its drawbacks and Silver feels torn all the time. Rina gave a really good sense of the scrutiny and guilt that Silver put on herself by being a public figure and living in the social media spotlight. If you did read the previous books and perhaps didn’t like Silver I think you will have a different view of her after reading this book.

Another thing I loved about Ruthless Empire is how their entire story wove in and out of the previous books timelines.  It hinted at past plots – giving us enough of a reference to other characters to keep the current plot moving forward, but also giving us a reference to the past that us greedy readers crave, especially when it’s a direct story reference and now told from another character’s POV. I personally eat that kind of stuff up any chance I get, so thank you when it happens.

Ruthless Empire is about redemption, love, dark desires, but also contains mystery, murder, and politics. This book is jammed packed with so much, but it also is kept my heart racing until the very end.
I love this couple together, and while it’s hard to pick a favorite, they are one of my favorite couples together. They understand and complete one another from a very early age and I really liked that about them.

While this may be the last novel about the four kingsmen in this series, there are certainly more interconnected books and novellas coming from Rina Kent. I’m looking forward to hearing more updates about these possessive guys and their family in the future. 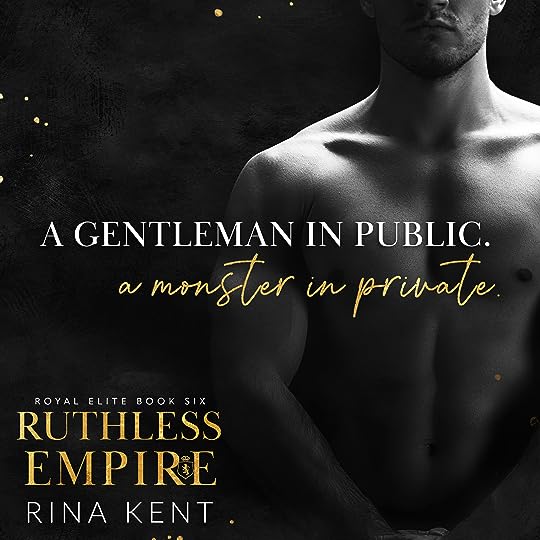 She’s off limits. He has none.

There’s a girl.
Beautiful. Popular. Fake.
And my obsession.
My fall.
Probably my damnation.
Did that stop me? Do I care? No and no.
There’s a line between right and wrong. Moral and immoral.
And then there’s her.
I cross every limit with blood-coated fingers.
She says she hates me.
I say I hate her too as I trap her, own her.
Make her all mine.

👑Start the Series👑
Ruthless Empire can be read as a standalone, but for better understanding of Royal Elite world, go meet Aiden and find out why everyone hates to love him and love to hate him.

The final installment of Royal Elite Series is coming on August 20.