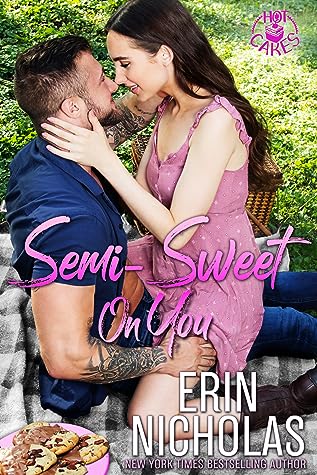 Semi-Sweet On You; Hot Cakes #4
(A standalone within a series)

Semi-Sweet On You was completely unexpected and hit me with all the feels. Cam and Whitney prove that second chances are well worth it and work better when the relationship bakes for the proper amount of time.

In this second chance romance where both characters have not only had ten years apart, but had occasion to run into one another in the small town where they both grew up and then recently end up working together you would think there would be fireworks or at least a small bomb exploding when they finally decide to make a go of a relationship, but instead this beautiful slow-burn story is nothing what I expected and everything I love about returning to Appleby, IA.

Erin Nicholas returns us to the small town of Appleby, IA with the loveable guys who bought Hot Cakes; Grant, Dax, Aiden, Oliver, and Cam.  We jump into a second chance love story between Cam and Whitney, who secretly dated in high school, but broke up ten years ago for multiple reasons, one of the main ones being that their families have been rivals for three generations.

While Cam wants to jump back into a relationship with Whitney (admitting he’s never really stopped caring about her) Whitney isn’t quite as eager to make that plunge. She has a lot to prove and dating Cam, as nice as it may sound, doesn’t land on her list of accomplishments. While Cam left Appleby, attended college, became a lawyer, and a millionaire with his friends, Whitney has only ever lived in Appleby and worked at Hot Cakes. Period. The end. Now that it’s under new ownership she has a lot of time and ideas to make up for. She wants to prove herself and dating Cam doesn’t seem like the best move to do that. That’s more like a lateral move if she just allowed Cam to solve all of her problems and she’s already allowed her family to keep her hidden long enough.

Cam wants to help Whitney, but he’s at a loss of how to do that. Whitney is clearly not the same girl he left when he went to college ten years ago. Gone is the confident girl and standing in her place is someone who doubts herself, which doesn’t help him when all he wants to do is swoop in and take care of her. When Whitney’s grandmother steps in and gives him a great idea, one that she really can’t say no to, he is able to help Whitney and Hot Cakes, along with reconnecting with pieces of his family’s past which in turn mends the town more than anyone could have anticipated.

There are lots of spectacular moments in Semi-Sweet; but some of my favorite were during the bake off, then pretty much any moment with Didi (Whitney’s grandmother), and lastly add in Henry (Cam’s younger brother) and I was a goner. I’m a total sucker for old and young people each and every time. Add them together and I’m in love. Didi and Henry spending time together is going to melt your heart and it will leak out of your eyeballs, so have a few tissues handy (FYI).

Overall, this book was completely unexpected and I loved every moment of it.

She broke his heart ten years ago.

And she might still be semi in love with him.

But that’s no problem, right? They can keep it professional.

Until her grandmother gets involved.

She’s thrilled to think that Whitney and Cam are still in love. And invites him to move in with her…and Whitney.

Of course, Whitney can handle that too. Yeah, everything is fine. Just fine.

Until Cam makes it clear that he’s all in.

Having him back is very sweet, but can she really have it all? Or will it all crumble around her?

2 thoughts on “Review – Semi-Sweet On You by Erin Nicholas”