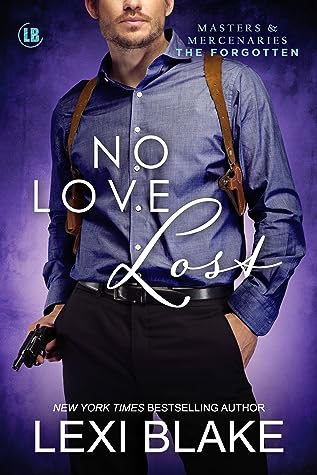 No Love Lost; Masters and Mercenaries-The Forgotten #5
(#5 within a series)

Every inch of this book is bittersweet happiness. From the very start of the Lost Boys series’ it has been some of Lexi Blake’s best writing. No Love Lost was a culmination of years of hard work and carefully crafted plotting.

Her James Bond like suspense mixed with a high steamy factor has made this a favorite series of mine for almost a decade. The Forgotten branch of the Masters and Mercenaries series has truly brought me happiness like never before, interconnecting her other worlds, bringing us a wild ride that spreads joy to all of her fandoms.

From the very dedication I was choked up. The story captivated me from the beginning to end; filled with action, hotness, tear filled moments and lots of LOL moments as well.

Ezra/Beck Fain man have been the man who helped keep the Lost Boys together, but in doing so he lost his job working with the CIA. In his place a sinister man took over and Levi Green is like no other bad man the McKay-Taggart team ever took on before.

Levi is truly a sociopath that should make you wonder about the inner workings of Lexi’s mind…his long game is unlike anything I’ve ever read and his evilness is so brilliant…I do wonder if Lexi sits around and cackles while she’s plotting. His game has involved the Lost Boys and Beck is tired of playing considering Levi is fixated on his ex-wife, Kim Soloman.

Kim “Solo” Soloman can never seem to escape the one man who holds her heart. Beck Fain can never forgive her for the death of his brother and that mistake will forever be the anger that is a wedge between them…oh and Levi Green.

As long as he is breathing down their necks, creating a cycle of chaos, walking away from the man she loves will be the only possible solution from the tangle that is her life.

It all comes down to saving the world, saving each other, and saving the team. Can this all be achieved while setting aside past grievances and will Levi finally get what’s coming to him?

No Love Lost is the last in The Forgotten series, but for fans of this series, we may know that even as the characters are aging, they have also reproduced like rabbits, so fear not as there will be generations to come to carry on the world that Lexi has created.

When Ezra Fain joined the ranks of the CIA, the last thing on his mind was romance. After meeting Kim Soloman, it was difficult to think of anything else. A tragic mistake drove them apart, leaving him shattered and unable to forgive the woman he loved. But when his greatest enemy threatens her life, Ezra leaps into action, prepared to do anything to try to save her.

Solo accepted long ago that she won’t get over Ezra. She’s worked for years to get back into his life, looking for any way to reignite the love they once shared. Unfortunately, nothing seems to penetrate the wall he has built between them. When she’s arrested for a crime she didn’t commit, she believes she’s on her own.

Racing across the globe, Ezra and Solo find themselves together again, caught in the crosshairs of the agency they sacrificed so much to serve. Days on the run soon turn to steamy nights, but Levi Green isn’t about to let them find their happily ever after. And when the smoke clears, the men and women of McKay-Taggart will never be the same again.

2 thoughts on “Review – No Love Lost by Lexi Blake”