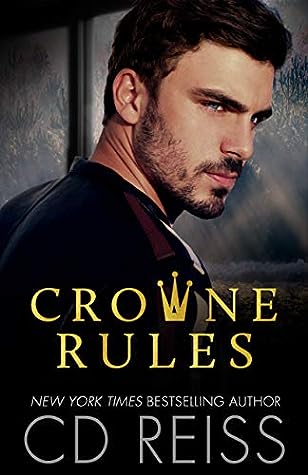 Holy smokin hotness!! Crowne Rules will push your limits, but if you like a man who pushes your limits than Dante Crowne is definitely the man for you.

While Mandy deals the fallout of her recent relationship, her best friend. Logan Crowne, offers up a quiet escape in Cambria. What Logan doesn’t know is that his brother is headed to the same location to deal with his own demons. While neither one really wants the other to be there, they are both too proud and stubborn to leave. A battle of wills bring about change that neither saw coming.

As the story weaves in and out you find that both Mandy and Dante have a tangled past that began when they were just teenagers. Spending seven minutes in a closet together might have meant more than either one ever realized.

All of the Crowne brothers are highly dominate, but I give high props to Dante for being the king of that title. He learned at an early age what his desires meant and he’s spent years honing those skills.

While Crowne Rules is one of the more sensual books, I would say it is also very symbolic. Much like the relationship between Mandy and Dante, the house is fundamental to how their relationship changes. It is in need of repair and tender loving care. While they fight and argue, the house breaks apart. I love the physical representation of how they are feeling; how their emotional walls are physically crumbling while the house is literally doing so around them.

There will be times that Dante will push your limits. He did mine and honestly my limits are pretty high, but once you learn where Dante is coming from and you can see him through Mandy’s eyes his whole demeanor and presence makes sense and those limits melt away.

There’s a house in Cambria with no phone, no internet, no connection to the outside world.
Dante and Mandy are stuck there together.
He needs a live-in assistant.
She needs a place to hide.
If she gives him total obedience, he’ll do everything in his power to clean up the mess she made back home. Anything less than unquestioning compliance, and she goes back to LA humiliated.
Those are the rules.
Take them or leave them.
Mandy figures she can do Dante’s menial tasks for awhile. Do what he says until the heat dies down.
She has no idea how hot it’s going to get until he tells her she has to do them on her knees.
—-
This is a STANDALONE.