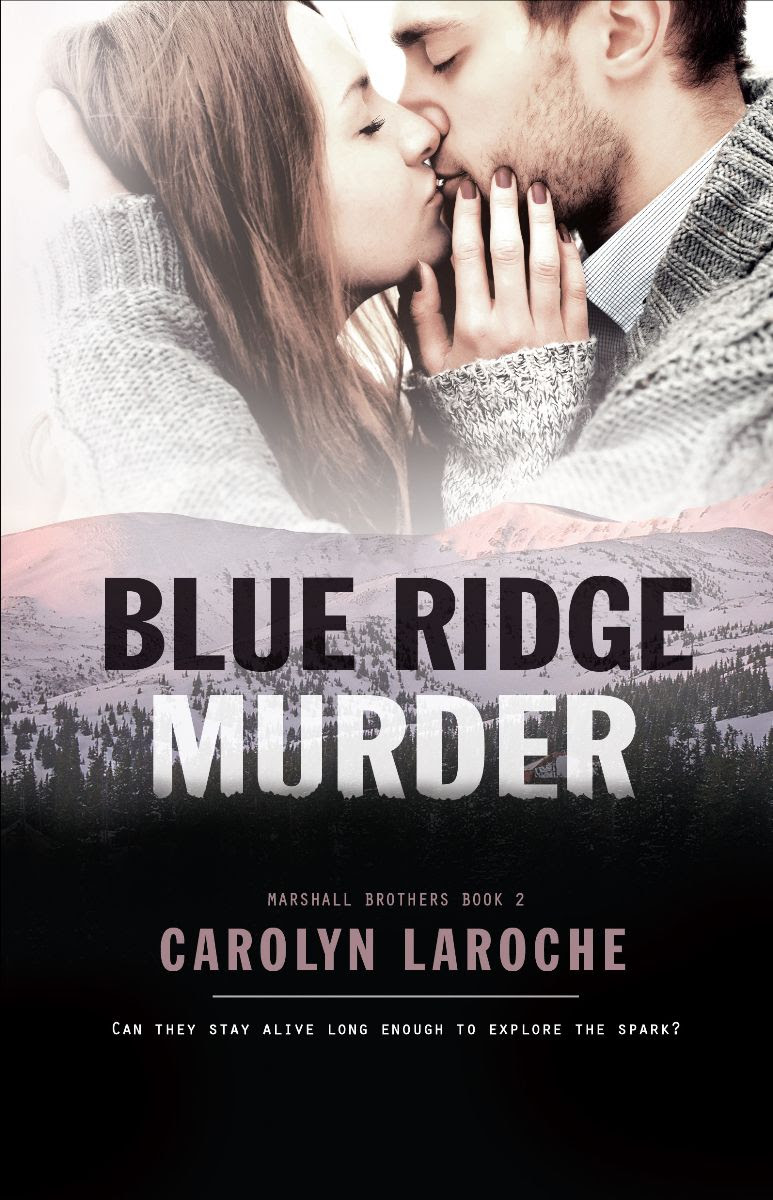 Parole Officer Alayna Baron fell in love once. Never again. The only relationship she needed was with her job. When her roommate surprises her with a long weekend in the mountains, she reluctantly agrees—completely unaware it’s a singles’ matchmaking event.

Detective Evan Marshall, widowed at a very young age, thought he’d had his one chance at love. When his brothers send him away for the weekend, the thought of romance never crossed his mind. At least, not until he found the intriguing Alayna stranded on the side of the road.

When a massive snow storm closes the roads and bodies start piling up at the inn where they are staying, Evan and Alayna join forces in an attempt to keep the other guests safe. But even with a murderer hidden amongst them, Evan and Alayna find a spark neither was looking for. If only they can stay alive long enough to explore it…

The darkness parted as headlights rounded the bend behind her car, snapping her back to her current situation. The Jeep Wrangler rolled to a stop behind her truck as the driver side window lowered. “Hey!” The driver waved to her. “You okay?”
Alayna motioned to her disabled car, still sitting on the ground. “Just fabulous. Some idiot ran me into the side of the mountain, but I found a real comfy spot to go ahead and freeze to death, so I’m good.”
The man laughed as he opened the door and stepped out of his car. The medical boot he wore on his left foot caught her attention immediately. She pointed at the boot. “You’re in worse shape than me. Maybe you should just stay in the car?”
He shook his head. “I’m a pro with this thing now. Are you injured at all?”
Snowflakes had already attached themselves to his dark blond hair. Alayna watched as he moved easily across the slippery pavement, only limping slightly.
“I’m fine. Aside from being stuck in the middle of nowhere in the dark during a snowstorm.” With a man who could be a godsend—or a serial killer.
When he reached her, he extended a hand. Alayna debated for half a second on letting the man help her up. Still a little off kilter from her accident, she gave in though, suspecting the slick roadway would have its way with her again if she didn’t.
Together they walked to her wrecked vehicle. He folded his arms over his chest as he inspected the damage to her SUV. One of the big snowflakes clung to his ridiculously long lashes. Alayna resisted the urge to wipe it away.
“It looks like your axle took a beating too. Not gonna be able to put on a spare.” He laughed. “Not that it would matter.”
Alayna shrugged and waved toward the front end of her truck. “Good thing I don’t have one to put on. That steam coming out from under the hood is probably gonna be a problem too. Thus, me being stranded on a mountain in a snowstorm.”
He looked her over carefully, as though considering whether to leave her there or maybe wear her skin someday. His intense scrutiny made her uncomfortable even while she kind of liked the way his blue eyes darkened to match the night sky.
Something about him seemed very familiar. She just couldn’t put her finger on it. Not just the fact that he kinda looked like Ted Bundy.
Shifting his weight from his injured foot, he looked from her to the damaged car.
“Do you have someone to call?”
“I have plenty of people to call. It’s just gonna take them about three or four hours to get here.” She pursed her lips, then frowned down at the cell phone she held in her hand. “I guess I can walk the rest of the way after I call for roadside assistance. Oh wait, I forgot, no service on my phone. Lucky me.”
As though Mother Nature wanted to gloat, the wind picked up. Snow swirled around them as a gust whipped past.
“Where you headed?” the man asked, yelling over the howl of the wind.
Alayna considered for a moment whether or not she should divulge that information, but finally decided she might be able to outrun the injured man if he did, in fact, turn out to be a killer. And she did have her gun on her if she needed it. It seemed like a better plan than freezing to death. Besides, she just couldn’t shake the feeling that she’d met him before, which made her feel like he was safe enough. “Blue Ridge Lodge.”
He chuckled. “Winter Singles’ Weekend Getaway?”
Madeline hadn’t mentioned anything about it being a singles’ getaway. If this were true, her best friend would be hearing from her as soon as she had service again. What a waste of a trip—and a perfectly good vehicle. She had no intention of dating ever again, and her roommate knew that. He didn’t need to know she’d been duped though.
Narrowing her eyes at his teasing tone, she crossed her arms over her chest. “Yeah. You got a problem with that?”
He held his hands up in mock surrender. “Not at all. My brothers signed me up for the same adventure as a gift. They think I’m depressed and it would cheer me up.”
“Depressed? That’s an interesting reason to send you on a dating retreat.” She shook her head, really beginning to consider the serial killer possibility.
“They’re wrong.” He winked.
Alayna shrugged. “My best friend thinks I need to spend more time with people my own age.”
He gave her an odd look but didn’t push the subject. “I can give you a ride the rest of the way. We can leave your car here for the tow truck. Then you won’t freeze to death waiting. In weather like this, it could take a while for them to get up here.”
Alayna looked from him to the car and back again. The temperature seemed to drop by the minute, and the snow fell faster and harder with each lost degree. She could realistically freeze to death by morning if she stayed. If she went, she could become the next missing person in the state of Virginia. Or she could be warm, dry, and fed within the hour. Her stomach growled, chiming in its vote for a meal.
She felt confident she could defend herself against the man. The storm, however, she was much less sure of that.
“Okay. Thanks. I’ll take the ride. I just need to grab my stuff.”

#1 Murder on the Mountain

Carolyn LaRoche grew up in snow country but fled the cold and ice several years ago. She now lives near the beach with her husband and their two sons.  She’s been known to lug her laptop to the baseball fields and keeps a notebook by her bed to jot down the next big story idea in the wee hours of the night.