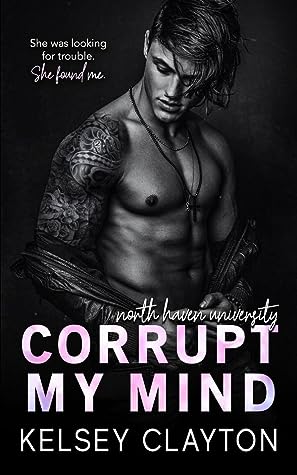 Corrupt My Mind; North Haven University #1
(A standalone within a series)

Wow! I needed a moment to collect my thoughts and emotions because this new book by Kelsey Clayton is just Wow!

First off, these Haven Grace Prep boys are growing up fine!!!! Now that that is off my chest, the gang now is off to college in this new interconnected series of Haven Grace University. While there are still updates on some of our favorite characters, this new series focuses on all new bad boys.

Zayn Bronsyn is caught in a web. A web so tangled that the more he tries to get himself unstuck he only gets more ensnared and a big, bad spider is closing in. Zayn is best friends with Easton and Knox (who had his happy ending with Delaney in The Saint) and the one girl who catches his eye just happens to be Easton’s little sister, Amelia.

Amelia has been away at boarding school for the past few years. She’s grown up while she’s been away and she’s more beautiful than ever. The allure of her returning certainly has Zayn’s eye, but he knows better than to pursue his best friend’s sister. Amelia has other plans to keep Zayn’s eye on her because she’s had a crush on Zayn for years and now that they are attending the same college she plans to make Zayn hers.

There are numerous obstacles stacked against Zayn when it comes to Amelia and her being Easton’s sister is just one of them. No matter how much he wants to do the right thing…remember that web I mentioned…Zayn gets tangled and wrapped in it every single time he tries to do the right thing. At the end of the day, he truly believes he’s a bad guy, but he’s the kind of guy you want in your corner every day of the week. He is the hero, the dragon slayer, the prince, etc…he just might be all that covered in a bad boy persona. Actually that makes him hotter.

Amelia on the other hand is bold and courageous. She is no wallflower. While she was always a good girl, in the past, she is looking for adventure and fun now that she’s away at college. While Zayn tries his best to keep her at arms length, Amelia is upfront, not only about her intentions regarding him, but also that if he doesn’t want her that she isn’t going to sit around and pine away for him. I respect her spirit and applaud Kelsey for writing a strong heroine. Oh, and that web Zayn is in, Amelia accidently trips and gets caught in it too.

Corrupt My Mind is very emotional and everything is just bigger when it comes to living life and navigating relationships at this point in their lives. The stakes were raised and Kelsey met everything perfectly. 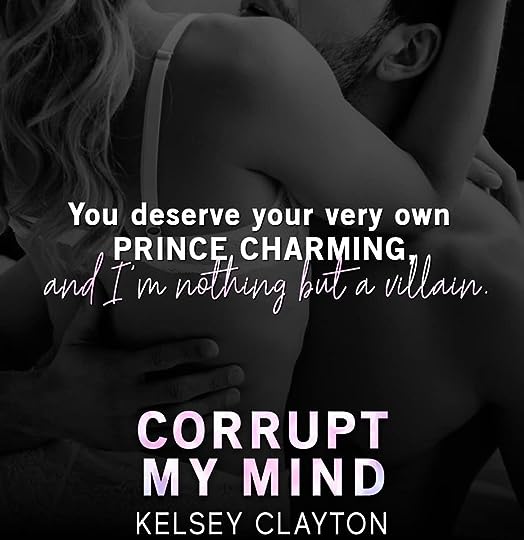 My name is Zayn Bronsyn,
and I think I screwed up.

I wasn’t supposed to fall,
especially not for her.
She’s in a league of her own,
and I’m just her brother’s scumbag friend.

The last time I saw her,
she was thirteen with braces.
Now, she’s back from boarding school,
with an hourglass body that’ll bring me to my knees.

If Easton finds out I hooked up with his sister,
he might actually kill me.
She’s too innocent, too perfect for a guy like me,
but I can’t resist dragging her into my messed up world.

Amelia Donovan might be the one to revive my blackened heart.