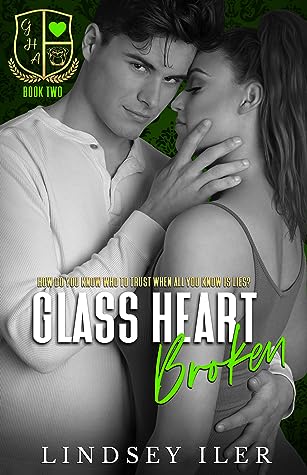 Mystery, deceit, and who to trust? Glass Heart Broken picks up right where Glass Heart Savage left off. Marek and Palmer are still twisted up in a tale of deception and lies, unsure of how much someone else is pulling the strings or if they are still deceiving each other.

While Palmer may have jumped into a relationship with Marek to try and uncover information about her sister ,Reed, she can’t seem to help falling deeper into emotions for the man that may destroy her.  While Marek has shown her the monster that lives inside of him, a monster that calls to the darker side of her, he also has a softer side that he doesn’t show anyone but her. The only problem, she doesn’t know if it’s an act or something real.

Marek can admit he’s played wicked games with Palmer in the past, but as his feelings are growing for her he’s not sure how he can forgive himself for the the hurt he’s caused her. He’s also not sure he can just shut off the dark side that lives inside of him, but he’s gotten to a point where he craves her and isn’t sure how to ever let her go. Before he can ever contemplate a future he has a past he needs to deal with and it has just crash landed on his doorstep and it seems the more he and Palmer try to uncover the mystery surrounding the murders on campus the more they find themselves falling into something more sinister than they ever thought possible.

A thrilling conclusion of Marek and Palmer’s story, but these boys of Glass Heart Academy are just heating up. LIES. SECRETS. MAYHEM.
The campus of Glass Heart Academy will never be the same once we’re through with it.

Palmer
They tried to break me, but they underestimated my strength.
When Marek says things aren’t always what they seem, I don’t want to believe him.
Now, I know the dark truth in his words.
As a participating player in this wicked game, how do I know who to trust when it seems our past is doomed to repeat itself?

Marek
Cruelty is my love language, and Palmer’s ready to make me pay for it.
We both know we shouldn’t want what’s right in front of us.
Will she accept the dark, broken pieces of me, or will she always watch over her shoulder, waiting for my blade to take pieces of her she doesn’t know are exposed? While we try to find ourselves in each other, darkness continues to follow us, setting off a series of events no one is prepared for.
What will be the cost of exposing the truth that haunts us?