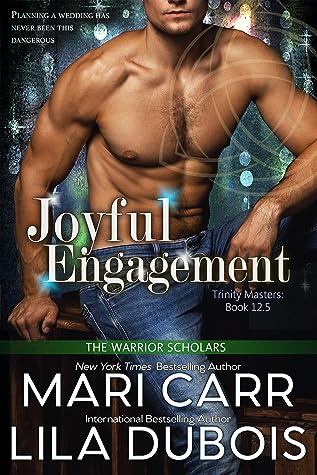 by: Mari Carr and Lila Dubois

Joyful Engagement is a novella that brings together a new throuple while trying to wrangle in one of my favorite trinities. Fall in love with these new characters, while trying to avoid some of the worst possible tortures….do, do, do, do…..an earworm.

Mari and Lila always bring the laughter along with the smexy good times and this novella was able to bring both in a very short span. The trinity that Tate and Roman are commissioned to bring in are one of my favorite in this series, which may be why I loved this book so much, regardless of why, the dynamic between both teams is funny and the chemistry is electric.

Planning a wedding has never been this dangerous.

Warrior Scholar Tate Greene has been given a simple job: mailman. He, along with Roman Tanaka, travel to South Carolina to deliver two letters. Just two.

When Tate, Roman, and Scarlet Hall–who has a secret mission of her own–get to Charleston, they find out that the Grand Master has sent them into hostile territory, and the simple task is far more dangerous than Tate expected.

After a run in with a stun gun, the three find themselves held captive by the very people they were sent to surprise. They’ll have to work together to not only escape, but keep a trinity from ruining their chance at a happily ever after.