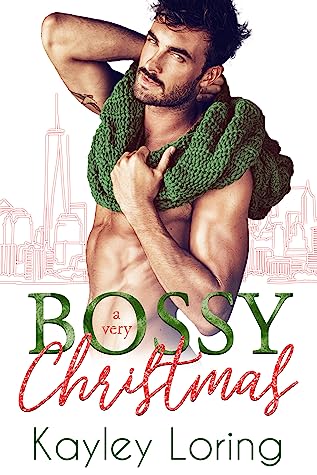 A Very Bossy Christmas
(A standalone)

This book was exactly what I needed!! Funny, funny, and more funny and don’t forget the smoldering nekky times. Kayley Loring delivers every time and just when I needed my funny bone refilled with laughter!

While Maddie Cooper and Declan Cannavale maneuver around the snark during office hours, because Maddie isn’t afraid to dish the sassy pants comments right back at her cranky boss, things really heat up with Declan approaches her to be his fake girlfriend during the holidays.

You see Declan has found himself in a bit of a pickle with his family when he mentioned he had a significant other, but he’s a bit of a workaholic so actually pursue a relationship right now, just ask Maddie. So when he can’t escape going home between Christmas and New Years for his brother’s wedding, well….he asks the one woman he knows in his life to accompany him. It shouldn’t hurt their working relationship to fake dating…right?

All Maddie wanted to do was spend the holidays with her family, not with her demanding, overworking boss, but when he literally draws up a contract – he is a lawyer after all – it is hard to refuse, especially when she sees glimpses of the nice person underneath the grinch persona he shows everyone on a daily basis. It doesn’t hurt that he’s easy on the eyes, but it shouldn’t hurt their working relationship to meet his family who doesn’t know it’s all fake…right?

A Very Bossy Christmas was so much fun. The holiday puns were ho, ho, hoing, the accents were so delicious I loved reading them in my head, and there were so many great secondary characters that I was snickering through the entire book. Kayley’s books always deliver great laughs intermixed with wonderful romance. It’s why her books have become a huge YES for me and this one was no exception.

What’s the actual last thing you’d ever want your executive assistant to see you doing the morning after you had hot, drunk, angry sex with her in a terrible hotel room? Dancing around your terrible hotel room to “Come and Get Your Love” like Star-Lord in Guardians of the Galaxy—naked? Yeah. Me too.

And yet, here we are.

This isn’t even the most unprofessional thing that’s happened between us in the past couple of weeks.

The first was when I agreed to let her have Christmas Day off, but only if she goes with me to three family gatherings as my fake girlfriend.
The second was when she caught me belting out a Christmas song on stage in the awful hotel bar.
The third was the hot, drunk, angry sex that followed, but I do not regret it.

And she hasn’t even found out the real reason I need her by my side this holiday season.

I need to pull it together before I do the dumbest, most unprofessional thing of all—fall head over heels in love with the only assistant who’s lasted more than a month at the job and claims to hate me and my moods more than she hates eggnog.

And I’ve seen how much she hates eggnog.

Audiobook is coming in December and will be narrated by Connor Crais and Mackenzie Cartwright!