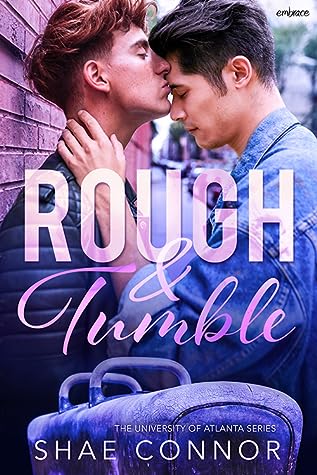 Rough and Tumble; The University of Atlanta Series
(A standalone within a series)

Grant and Darryn are both roommates and teammates. Grant has had a crush on Darryn for quite some time, but he never told Darryn he was gay. I completely understand his thought process, straight guys are not very forgiving, especially athletes with raging hormones, and on top of it Grant is under the impression that Darryn is straight. We find out that it isn’t entirely true as Darryn’s started having feelings for Grant (his first time stepping outside the straight zone), but instead of ever saying anything about it he went and found someone else, Rich.

This begins a toxic relationship between Darryn and Rich, and leaves Grant wallowing in remorse for not saying something sooner. I will admit the story does drag a bit while Grant kicks himself around watching Darryn in his new relationship, but there is also purpose behind it which does all make sense by the end. Although I’m also going to admit, as a reader I’m there wanting that HEA for Darryn and Grant sooner.

Grant is really a sweet guy and you want the best for him, no matter how much you want to scream and shout to stop wallowing, but that is also what makes him a really great guy, he’s always got your back.

College is certainly a time where you are trying to find yourself and might get lost along the way. Rough and Tumble is story that highlights those mistakes and pitfalls that young adults fall into, but hopefully don’t mess up too much that they can’t get out of, especially with the help of a good friend and a little love.

Shae Connor is a new author for me, along with the sport of men’s gymnastics. The writing is excellent and I did enjoy the gymnastics portions, if anything the pacing was a bit sluggish, but the topic of toxic relationships, especially in males, is overlooked and I respected Shae for tackling it.

My name’s Grant Clark, and I have managed to screw up my entire life. In triplicate.

Number one: I fell in love with my best friend.
Number two: I thought he was straight.
Number three: Because of number two, I didn’t make a move on number one. Until it was too late.

When I accidentally interrupt him with another guy—and he turns out to be the worst—well, I think it’s time I finally make a move.

Warning: This book contains two men who don’t mind a little humor and heartache as they struggle to find their happily ever after in the aftermath of a toxic relationship.